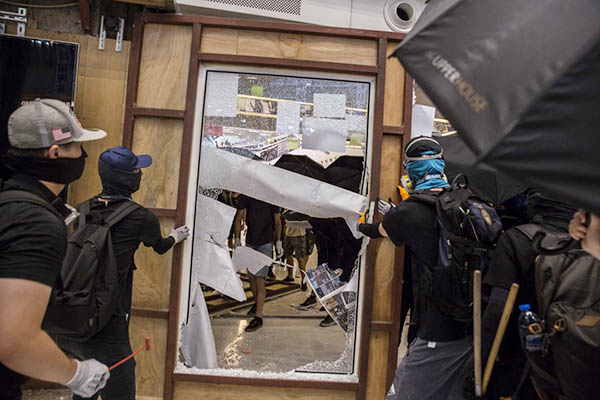 Pro-democracy protesters clashed with riot police outside a mall on Sunday, with some rioters vandalizing a nearby subway station and defacing a Chinese flag, but plans to disrupt the airport did not materialize.

Police fired brief volleys of tear gas and rubber bullets in the northern town of Sha Tin late Sunday afternoon, capping a day that saw thousands rally peacefully inside a mall before the mood soured.

Authorities reduced rail and bus links to the city’s airport while police stepped up security checks in a successful bid to stop a crowd from massing at the bustling transport hub. The airport—the world’s eighth busiest—has become a frequent target for demonstrators pushing for greater democratic rights and police accountability.

Online forums used by the largely leaderless movement had called for a “stress test” of the airport on Sunday, code for disrupting travel links or occupying buildings. Instead thousands gathered inside a mall in the northern town of Sha Tin to sing protest songs and make origami cranes, the latest rally in what has now been 16 consecutive weekends of protests and clashes.

Many shops inside the complex shuttered but the unsanctioned rally remained civil for much of the afternoon. “Even if we are very tired, we can’t give up on our rights,” a teacher at the rally, who have her surname as Ching, told AFP. “If it [the movement] stretches to 100 days, 200 days or even 1,000 days and we still don’t get what we want, we will continue to come out.”

Tensions rose later in the afternoon. Masked activists paraded a Chinese flag through the mall that had been torn down from a nearby government building. It was later thrown into a nearby river. Groups of masked protesters then vandalized ticket machines in Sha Tin’s subway before riot police rushed in to close the station down.

Before police arrived local television networks showed footage of a man with bruises and cuts to his face being harangued by pro-democracy protesters inside the station. Increasingly brutal fights between opposing sides have broken out in recent weeks—a vivid illustration of the ideological fissures now running through the international finance hub.

A standoff between police and a few dozen activists behind umbrella shield walls ensued but the protesters soon dispersed once tear gas and rubber bullets were launched at them. Police snatch squads made multiple arrests.

Riot officers were also called in to rescue Patrick Nip, a minister in the Hong Kong government, after his chauffeured car was surrounded by angry protesters, local news outlets South China Morning Post and RTHK reported. Video posted online showed residents heckling a car that was surrounded by a large crowd, which quickly ran away once riot police came onto the scene.

Millions of pro-democracy supporters have taken to Hong Kong’s streets for the past three months in the biggest challenge to China’s rule since the city’s handover from Britain in 1997. With few protester demands met, violent clashes have become more intense and frequent.

The protests were ignited by a now-abandoned plan to allow extraditions to mainland China. But after Beijing and local leaders took a hard line, the movement snowballed into a much wider expression of rage at the city’s local government and life under Chinese rule.

Core demands from protesters include an inquiry into the police, an amnesty for those arrested and universal suffrage—all rejected by authorities and Beijing.

Earlier this month city leader Carrie Lam abandoned the extradition bill and called for dialogue but many have deemed the concessions to be too little and too late. As a result, the protests show little sign of abating.

On Saturday police used tear gas and rubber bullets to disperse hardcore activists throwing rocks and petrol bombs in two towns near the border with mainland China. This weekend’s protest crowds have been noticeably smaller than some of the more recent rallies.