From Gutters and War Zones 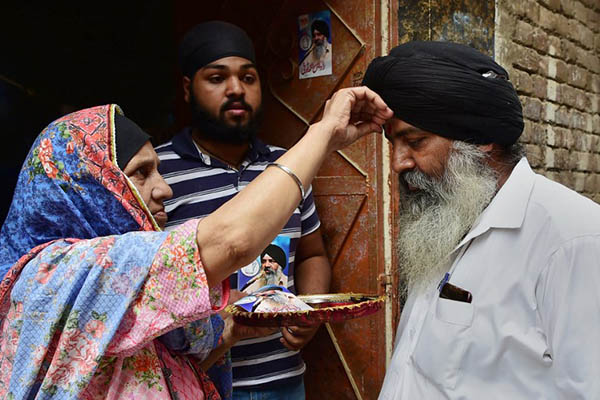 There is the ecologist, the “semi-corrupt,” the opportunist, and the indestructible. Alongside Pakistan’s mainstream politicians a battery of flamboyant candidates are contesting nationwide elections on July 25.

Here are five who each embody the myriad challenges facing the country.

To make his point, Ayaz Memon Motiwala campaigns from the gutters.

Running as an independent in Pakistan’s largest city of Karachi, Motiwala prefers to get his anti-corruption, pro-environment message out as he lies in pools of sewage—all while draped in Pakistan’s green and white flag. “If they do not cover the gutters then this is my right to sit inside the gutter and protest,” Motiwala tells AFP. He has chosen the water tap as his election symbol.

Water is a highly charged issue, with experts saying Pakistan faces “absolute scarcity”—less than 500 cubic meters available per person nationwide—by 2025. “Vote for me—but even if you don’t—please remember that clean water is the need of hour,” Motiwala tells voters.

Radesh Singh Tony is the first independent candidate from Pakistan’s Sikh minority to run in conservative Khyber-Pakhtunkhwa province. The odds are already heavily stacked against Tony in a constituency populated with around 130,000 mostly Muslim registered voters, compared to just 160 Sikhs.

His two opponents come from parties backed by hardline religious organizations with links to militant groups.

The contest comes just months after local Sikh community leader Charanjeet Singh was shot dead, and weeks after an bomb attack killed over 20 people at an election rally in the provincial capital. If elected, Tony has vowed to serve all communities equally, but is still wary of simmering threats.

“We are vulnerable targets,” Tony says. “We are campaigning in an atmosphere of fear.”

Hailing from militancy-wracked South Waziristan, Ali Wazir’s losses in the country’s long war with insurgents are horrifying. He has had 10 relatives killed by militants, who have also destroyed his home, orchards and petrol station since the military first took the fight to the Pakistani Taliban more than a decade ago. But he has never backed down.

As a rare vocal critic of both the Taliban and Pakistan’s security establishment, Wazir has risen to prominence for taking the military to task over heavy-handedness against local civilians during the fight with insurgents. “I am contesting elections at the demands of my people,” said Wazir in an online video. “I will struggle for their rights.”

Shahzada’s moustache is surmounted by sunglasses and a garnet headdress, while a thin red scarf adorns the neck of a candidate seeking to be the “king of politics.” But Shahzada is a lonely king at the head of a party of which he is the only member, who in the last 32 years has competed in 41 elections, and never won one.

In 1990 his party was refused registration when he vowed to provide Pakistanis with residential plots on the moon. In 2013 he won just seven votes.

But he says it’s all satire. “Politicians are making us fools, they are misleading the public, and I try to make people aware with my funny style,” he told AFP.

His slogan? “Need-based corruption.” If elected, Shahzada vows to be “semi-corrupt.” That is opposed to the “full-corrupt” politicians currently in power, he says.

Opportunism is his ideology. Since 1985, Abdul Karim Nousherwani of Balochistan, Pakistan’s poorest and most unstable province, has changed party seven times and been elected twice as an independent. This time he will compete for the Balochistan Awami Party, a local provincial organization.

By aligning with the ruling parties that he gets development projects for his territory, he says. “The moment he feels the power ship is sinking, he will be the first to jump out for another ship,” says another parliamentarian, on condition of anonymity.

Nousherwani, who first worked as a driver, was unable to run in the 2002 and 2008 elections because he did not graduate from school.