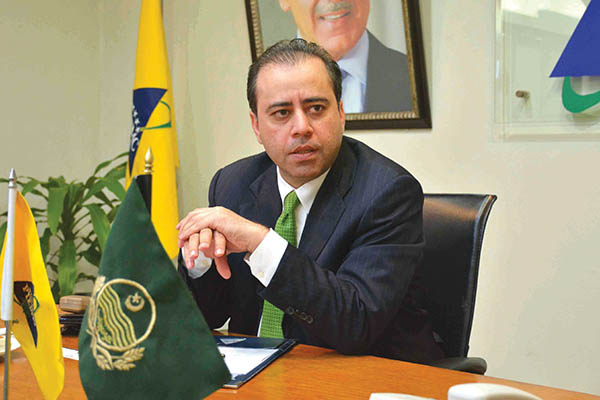 A businessman who has served on the board of directors of the Punjab Industrial Estate Development & Management Company for several years, Rizwan Khalid Butt assumed charge as the organization’s chairman in August 2016. The Lahore-based entrepreneur has been an active participant in developing industrial policy in Punjab province and was instrumental in setting up the Quaid-e-Azam Apparel Park. Earlier this month, he sat down with Newsweek Pakistan to discuss a new regulatory framework and industrial development in Punjab province. Excerpts:

What is your vision of industrialization in Pakistan?

My vision on industrialization consists of three components: setting up an industrial estate in every district of Punjab province; job creation and prosperity to increase the GDP growth; development of business-friendly policies that are also environmentally conscious. This three-tier strategy is intended to promote industrialization in the province.

What is the status of the Government of Punjab’s revised industrial policy?

We are in the process of formulating a policy framework for industrial networking in the province. This policy has multiple aspects to address various issues relating to industrial coding, environmental policy framework, sector clustering, waste management, and many more. We hope the establishment of a concrete policy will yield a lasting legacy for years to come.

Have you encountered any resistance to the revisions?

It is a paradigm shift and new ideas require discipline and regulation, which often encounter resistance from those with vested interests. In addition, bureaucratic red tape is another challenge. We are aware of all these issues and hope to overcome them. Currently, there are more than 250,000 factories operational throughout Punjab; it is obviously a challenge to harmonize their activities. But we are devising a mechanism to monitor the implementation of internationally acclaimed quality standards. The concept for an Industrial Regulatory Authority of Punjab has been finalized and we are working to iron out a policy framework. Once this regulatory body is in place, the PIEDMC would become an extension of it and both organizations would complement each other’s efforts. Currently, there is no administrative authority to check industrial units on quality control, child labor and such prevalent issues. One this administrative authority is in place, it will ensure global manufacturing standards and halt the production of substandard goods.

Pakistan’s industrial growth over the past 70 years has been haphazard and unsustainable. Industrial development on and near agriculture land and housing societies has resulted in toxic waste that pollutes residential areas and farmland. We are trying to overcome such issues without fixing responsibility; a pilot project is underway to properly process waste material with the help of the Lahore Waste Management Company. Similarly, a weak policy framework on quality standards has weakened our export potential; we are going to introduce quality standards in all industrial estates to overcome this issue.

Has the PIEDMC achieved its goal of job creation in industrial estates?

The PIEDMC has set up eight industrial estates over 5,000 acres. On average, every acre of land produces 100 jobs, which means PIEDMC will have helped create 500,000 jobs in the next one-and-a-half years. A majority of the industrial sites are near completion, and our next goal is matching up investors to the industrial units that are best suited to these sites. The PIEDMC will set up a facilitation desk at its head office to guide prospective investors through this process. This desk will provide research-based guidance to both local and international investors, including those interested in projects under the China-Pakistan Economic Corridor. We will execute our new policy framework through this facilitation desk, which will be staffed with graduates from leading business schools to develop guidelines with the help of the bureaucracy.

Has the bureaucracy been supportive of your plans?

Everyone had advised me to be cautious of bureaucratic interference when I took charge as PIEDMC chairman. But my experience has been largely positive. The bureaucracy is just as frustrated over wrongdoings across the country and realizes that Pakistan cannot move forward without putting our house in order. They are very positive and want to improve the existing state of affairs, and have been proactive in suggesting solutions to the issues facing industrial growth. Most bureaucrats are aggressive and upright persons who support the private sector under the leadership of Chief Minister Shehbaz Sharif, whose political leadership plays a vital role in shaping the province’s industrial outlook. The provincial bureaucracy has given its 100 percent to make PIEDMC a success story.

Who is investing in the industrial estates set up under PIEDMC?

Most of our current investment comes from local businesses—around 95 percent—with foreign investors making up the rest. I want to increase foreign investment to 20 percent. We are working hard to achieve this target, as a large number of expatriate Pakistanis are returning home for good and we expect heavy investment from them. Similarly, we are also tapping investors from China and Turkey, whose governments have been very supportive. We plan to expand the PIEDMC team to ensure we are prepared to tackle these challenges.

How has the current power shortage impacted the industrial estates under PIEDMC?

The government’s efforts to overcome the power shortfall are on the right track. I think 99 percent of the issues can be resolved within two to three years and long-term projects will ensure they won’t reoccur. Once the power needs are fulfilled, all factories can be operational on double shift. Until then, PIEDMC-run industrial estates are facilitating industrialists in three ways: renting power generators during the summer, the holy month of Ramzan and other peak seasons; procuring electricity from power plants situated in and around the industrial estates directly on take-and-pay basis; and utilizing power produced by industrialists who have installed captive power plants within our industrial estates.

What are your priorities in spreading out industrial estates in every district of Punjab?

How does PIEDMC meet its Corporate Social Responsibility requirements?

Creating jobs is itself, by default, a CSR. In addition, our management wants to set up hospitals, labor colonies, daycare centers and other similar facilities. We are developing a state-of-the-art labor colony at the Quaid-e-Azam Apparel Park and are working on conceptualizing local daycare and childcare centers to look after the children of laborers. These initiatives are an integral part of our new policy framework.

You recently visited China. What are the PIEDMC’s prospects under CPEC?

It was a unique opportunity [to visit China] as chairman of PIEDMC. Like the 1970s and early 1990s, Pakistan’s economy is set for another turning point with the completion of CPEC. It’s history in the making and I believe Chinese investment in Pakistan will only rise in the next 20 years. During my visit, I found China is very serious in developing Pakistan—this is a once in a lifetime opportunity for us and we must act on it. I attended the Joint-China Commission Meeting, which was very encouraging as representatives from Pakistan’s five provinces were united with regard to CPEC projects. No one opposed it and, in fact, preferred to extend a real ownership to the projects.

China has developed a multi-pronged strategy by initiating government-to-government projects, which are of strategic importance. The second approach is through business-to-business agreements and third is business-to-government in the fields of chemicals, power generation and relocation of different industries. Chinese banks are also willing to finance Pakistani businessmen under joint ventures with their Chinese counterparts. Once the whole plan is operational, the JVs established in Pakistan will also benefit from the infrastructure being used to export Chinese goods to the world. Majority of the trucks would return empty after unloading goods at Gawadar Port, and we can send locally produced goods to China simply by paying the transportation cost once we develop goods as per the requirements of the Chinese.

How do you manage your own business in addition to running the PIEDMC?

It is challenging to strike a balance between the two, as I do not have a family business that relies on multiple generations to be prosperous. I am a self-starter and strive to fulfill my responsibilities both on the personal and PIEDMC fronts. I am grateful to Chief Minister Muhammad Shehbaz Sharif for choosing me to serve my homeland and the business community.