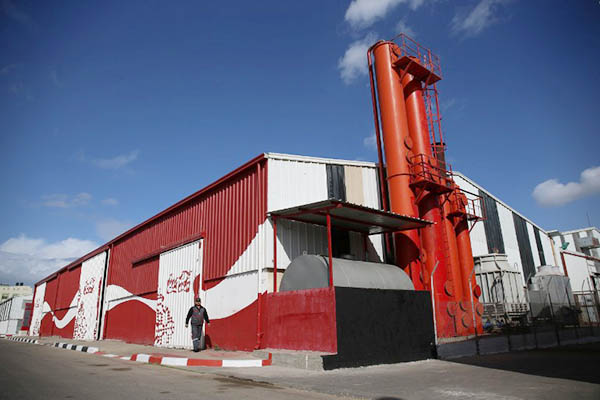 Manager of Palestinian Coke franchisee says they are only concerned with economic success, not political implications.

The head of the Gaza Strip’s first Coca-Cola plant said Thursday he hoped the venture would send a “message to investors” that the beleaguered Palestinian enclave was open for business.

“It’s a message to a lot of investors and global companies that investments in Gaza can succeed,” said Yasser Arafat, Gaza manager of Palestinian Coke franchisee National Beverage Company (NBC). “If we can move away from fear we can reduce unemployment,” he told AFP.

A few hundred meters from the border with Israel the new $20 million bottling facility formally opened on Wednesday. It will provide around 120 jobs immediately, Coca-Cola said, with an eventual expansion to 270.

In Gaza, blockaded by Israel for nearly a decade, the launch is the result of years of work and was hailed as a rare positive moment for the ailing economy. “It is wonderful that an international company opened a branch in Gaza,” said Samir Skaik, who works in tourism, hoping it will encourage more investment.

The 15,000 square-meter site was a hive of activity on Thursday, with forklift trucks shuffling crates of bottles to and fro.

Marcel Abu Shadaq, in his 20s, said the plant’s opening “helps a lot of young people in the current circumstances to gain a source of income and end the frustration.” Opening a new business in Gaza brings with it a “unique” set of challenges, Arafat admitted.

Israel has maintained a blockade on the Palestinian enclave for a decade, which it argues is necessary to prevent Islamist movement Hamas, which runs the Strip, from expanding its military capabilities. The two have fought three wars since 2008, the most recent of which in 2014 left much of Gaza’s industrial sector badly damaged, as well as thousands of homes destroyed.

The unemployment rate in the coastal territory is over 40 percent, with close to two thirds of young people out of work. Arafat is careful not to step into politics or comment on the possible irony that Coca-Cola, perhaps the most obvious symbol of Americanization, is seen as a ray of hope in the territory run by Hamas, which America considers a terrorist organization.

“We do not look at things politically at all, we look at things in economic terms,” he said. “If the economy strengthens friendship then it is to be welcomed.”

The United Nations has estimated the Palestinian economy could double in size if the Israeli occupation ended.