Presenting an annual report of the Trust’s activities, Executive Committee Secretary Khalid Manzoor Butt said scholarships worth Rs. 15 million had been awarded to 600 deserving students in the past year, including over 50 Golden Scholarships, which cover a student’s full tuition and boarding expenses. Since 2009, the Trust has awarded over Rs. 85 million in scholarships to 2,850 students, he added.

Vice Chancellor Shah said the Fund had helped the varsity provide facilities for physically-challenged students and hire faculty for the Sociology Department. He also assured all donors that scholarships were awarded purely on merit and after rigorous scrutiny of all candidates to ensure they were truly deserving. 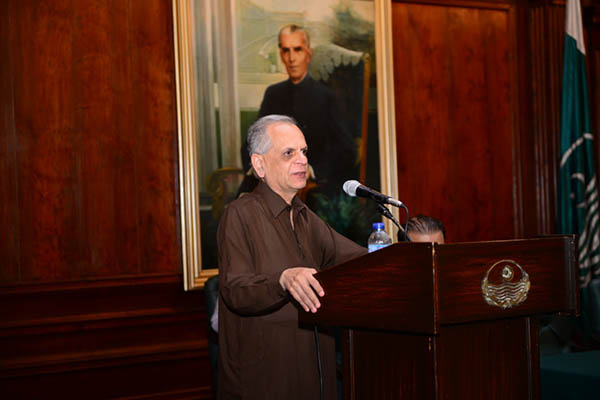 Governor Sarwar praised the GCU Endowment Fund Trust as a “role model” for similar institutions, adding he would strive to replicate it in other educational institutions of the province. He and the vice-chancellor also thanked the Endowment Fund Trust’s executive committee members—Iqbal Z. Ahmed, Mian Misbah-ur-Rehman, Parvez Hassan, Mian Muhammad Ashraf, Javaid Oberoi, Zia Rizvi and Khalid Manzoor Butt—for their efforts in strengthening the Fund.

Ahmed informed the fundraiser that the Fund had been promised a donation of Rs. 50 million on behalf of the federal government by then-prime minister Shahid Khaqan Abbasi. Singer Khan urged the Trust to organize more fundraising dinners, including overseas, to provide more aid for at-risk students.