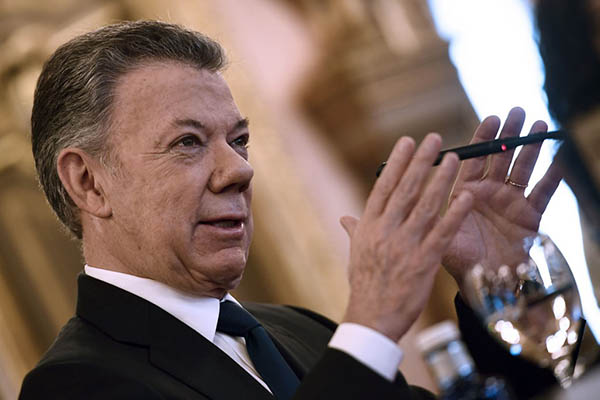 The threat of climate change has overtaken the prospect of nuclear war as the most pressing concern facing humanity, a former Colombian president and Nobel peace laureate warned on Monday.

“After World War II, the world was facing a threat from a nuclear war,” Juan Manuel Santos, a staunch environmentalist, told the World Green Economy Summit in Dubai. “The threat from a nuclear war remains… but we have something worse, which is a certainty. That is climate change,” he said. “If we don’t act, we will perish. We must act for survival.”

Santos, who won the 2016 Nobel Peace Prize for his efforts to bring the country’s more than 50-year-long civil war to an end, also won plaudits for his green policies while in office.

“Some countries still think that moving toward green economy is a luxury. Actually, it has become a question of to be or not to be,” said Mohamed Kafafy, president of the World Green Energy Council which organized the conference along with Dubai’s government.

Kafafy said that funds collected from carbon taxes should be used to promote green economic initiatives and renewables.

The International Monetary Fund this month urged the world’s biggest carbon polluting nations to agree to tax emissions at $75 per ton in the next decade to keep climate change at safe levels.

Greenhouse gases are released as by-products in sectors ranging from energy to manufacturing, shipping and agriculture. Taxes on such emissions provide an incentive to cut pollution. The IMF said such taxes are the most efficient way to tackle global warming.

Assistant United Nations Secretary-General for Climate Change Ovais Sarmad warned that the world is facing an “existential crisis.” He added, “We have all the agreements, the policies and the tools. Now, we need to enhance the implementation.”