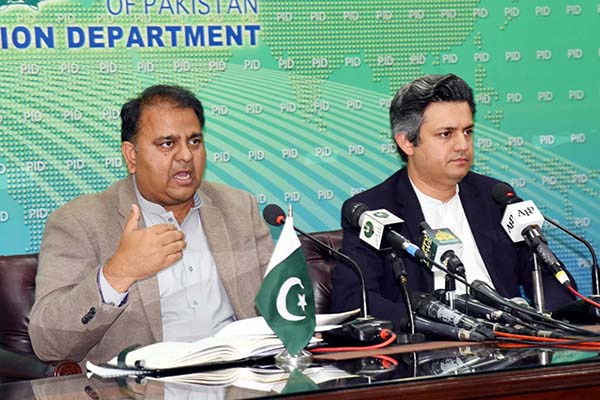 Addressing media after meeting of federal cabinet, science and technology minister says government is weighing legal options if ECP does not resign

Prime Minister Imran Khan is personally monitoring the prices of daily essentials and the incumbent government is utilizing all options to provide relief to the common man, Science and Technology Minister Fawad Chaudhry said on Tuesday.

Addressing media alongside Finance Minister Hammad Azhar after a meeting of the federal cabinet, he reiterated the Pakistan Tehreek-e-Insaf’s stance that the economy had been “in shambles” when it came to power. “Regardless, we took all possible steps to protect the poor from the effects of inflation and price hike,” he claimed, adding that the government’s efforts would help the Utility Stores Corporation emerge from losses by the end of the year.

Chaudhry, filling in for Information Minister Shibli Faraz, said that the cabinet had approved a comprehensive licensing policy to end a ban on issuing licenses for prohibited and non-prohibited bore arms. He said the prime minister had directed the interior ministry to introduce a comprehensive arms licensing policy nationwide. “I hope it will be announced in a week,” he said.

Noting that the cabinet had reviewed the prevailing coronavirus situation, Chaudhry said concerns had been voiced over the ongoing third wave of the pandemic sweeping the country. He hoped that Pakistanis would come together and overcome the recent surge in the same manner it had the earlier two waves.

He stressed that COVID-19 had wreaked havoc on the healthcare systems and economies of many developed countries, but Pakistan had—thanks to timely interventions—successfully managed to save lives, posting a significantly lower mortality rate than its regional neighbors, and the livelihoods of people.

To a question, the science and technology minister said the government would consider initiating contempt proceedings against the Chief Election Commissioner and members of the Election Commission of Pakistan (ECP) if they did not resign from their offices as had earlier been demanded by government ministers.

“We are working with the attorney general of Pakistan and if the ECP does not resign, we will go for contempt of court proceedings against them,” said Chaudhry, claiming the unprecedented criticism of the autonomous body by a sitting government was merely reflective of the people’s desires.

“The current commission is not serving the purpose for which it was created,” he claimed, reiterating that the ECP could only be credible if all political parties had faith in it.

Prior to the press conference, the government had broadcast Prime Minister Imran Khan’s opening remarks to the cabinet. In his speech, Khan had reiterated his desire for the use of Electronic Voting Machines to ensure fair and transparent elections. “From now on, I want weekly briefings on EVMs and ensuring overseas Pakistanis can vote,” he said.

According to Chaudhry, the cabinet approved a proposal to appoint Raja Mazhar as the managing director of the National Book Foundation. He said the cabinet had also discussed the improper use of petroleum companies’ CSR, adding the petroleum minister had now been empowered to monitor the entire process of CSR utilization.

The cabinet approved, he said, a proposal to issue smart cards to registered Afghan refugees, adding that this was part of the prime minister’s policy of providing relief to the impoverished.

He said the cabinet was also briefed on structural reforms and had decided to place all future latest audit paragraphs before the Public Accounts Committee to promote timely process of parliamentary supervision and accountability.