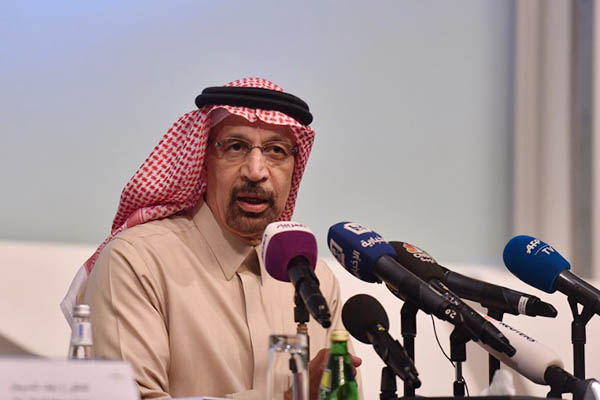 Experts say energy output from renewables, especially solar and wind, is growing faster than anticipated, threatening to displace oil, gas and coal as the world’s main sources of power. But Saudi Energy Minister Khalid al-Falih told a clean energy conference in Abu Dhabi that the transition must take place gradually in order to avoid “chaos.”

“Balancing greenhouse gas emissions will take decades,” he said at Abu Dhabi Sustainability Week. “It’s not going to be done overnight. In the interim, ample and reliable energy sources like oil and gas will need to be made available or [the world will] risk chaos.” Unveiling Saudi Arabia’s clean energy program, he said the kingdom plans to create “a global hub of renewable energy capability” over the coming decades, producing upward of 200 gigawatts of power.

Falih proposed a strategy of gradually improving the quality of fossil fuels to reduce greenhouse gas emissions at the same time as increasing renewable energy consumption. “We urgently need consensus around an energy transition strategy that is realistic, fair and pragmatic, driven by economics and technology, not a blind ideology,” he said.

Critics accuse Riyadh of having a long history of obstructing climate action.

The kingdom, along with several other countries including the United States, was accused of downplaying scientists’ warnings about climate change at U.N. talks in Poland last month. Representatives of smaller nations imperiled by rising seas alleged that Saudi Arabia and its allies were buying time for fossil fuels at the expense of the planet.

A report released last week by the International Renewables Energy Agency (IRENA) said the rapid growth of renewable energy sources was causing major shifts in international politics. It said the rapid rise of renewables is being driven by new technologies and falling costs, making them ever more competitive against fossil fuels. But Falih insisted that global demand for oil “will continue to grow for the foreseeable future.”

Saudi Arabia plans to generate some 59 gigawatts of electricity from solar and wind sources by 2030, he said.

The kingdom, which has been exporting close to 8 million barrels of oil daily, currently produces virtually no energy from renewable sources. But last week it signed a deal to establish a 400-megawatt wind farm, which follows a deal last year to build a 300-megawatt solar plant.

Falih said Riyadh would tender dozens of renewable energy projects every year, with at least 12 such deals slated for 2019. It will also begin to introduce nuclear power, building two reactors in the next decade with a combined production of between two and three gigawatts, he said. This strategy will help the kingdom save up to two million barrels of oil daily by 2030, he added, without providing details on the expected costs of the program.