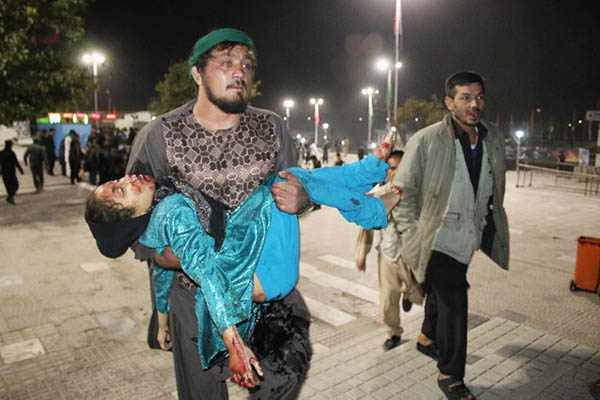 At least 14 killed, 36 others wounded in attack on Shia Muslims marking Ashura.

Gunmen targeted Shia pilgrims in Kabul late Tuesday, killing at least 14 people as they gathered to celebrate Ashura, one of the most important festivals on the Shia calendar, officials said.

Some 36 people were wounded and at least one attacker killed, interior ministry spokesman Sediq Sediqqi said, adding that the assault was over. Special forces had briefly entered the Karte Sakhi shrine near Kabul University to see if any more gunmen were sheltering inside, with police evacuating people from the area, officials said.

Of the 14 killed, 13 were civilians and one a police officer. Three police were among the wounded, Seddiqi said. “A number of attackers have targeted people in Karte Sakhi shrine,” said Kabul Police chief Abdul Rahman Rahimi. “Police have evacuated dozens of people from the shrine. A number of civilians and police have been injured.”

Police also said two grenades had been detonated during the attack.

No group has yet claimed responsibility for the assault, which President Ashraf Ghani condemned as a “clear sign of a crime against humanity.”

Ghani vowed the government would use its “maximum capacity” to provide security during Ashura, which will be celebrated on Wednesday, and called on all Afghanistan’s sects to “stand firmly against” the country’s enemies.

The threat of attack targeting Shia Muslims was considered particularly serious during Ashura, and many foreign embassies had restricted their staff’s movements until the end of the week in Kabul.

Ashura commemorates the death of Imam Hussein, grandson of Islam’s Prophet, who was assassinated in 680 and whose tragic end laid the foundation for the faith. For Shias around the world, Ashura is a symbol of the struggle against oppression.

The last attack on the Afghan Shia minority, on July 23 in Kabul, killed 84 people and left 130 injured. It was claimed by the Islamic State organization.

Tuesday’s attack came as Afghanistan deployed hundreds of commandos backed by NATO airstrikes in Lashkar Gah to drive Taliban insurgents from the southern city after their latest attempt to seize the capital of Helmand province. The wave of violence underscored unraveling security in Afghanistan as the resurgent Taliban continue a push into urban centers 15 years after they were toppled from power by the U.S. invasion.