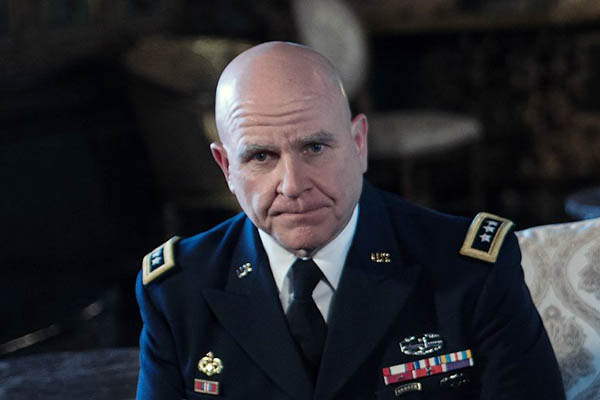 Donald Trump tapped respected Army lieutenant general H.R. McMaster as his national security adviser on Monday, hoping to course correct after his first pick resigned and his second turned down the vital post.

Trump announced the counterinsurgency strategist’s appointment at his Florida estate Mar-a-Lago, ending a one-week search to replace Michael Flynn, who lasted less than a month on the job. Flynn was forced to resign on Feb. 13, after questionable contacts with the Russian government and revelations that he lied about them to the vice president and the FBI.

Trump scrambled to replace Flynn after retired vice admiral Robert Harward turned down the post, amid a wrangling over lower-level National Security Council appointments and a meandering Trump press conference.

The White House said that Trump “gave full authority for McMaster to hire whatever staff he sees fit.”

The 54-year-old McMaster is know for his criticism of the U.S. military’s handling of Vietnam War and his own service as a commander in northern Iraq in 2005.

A 1997 book he authored is pointedly titled Dereliction of Duty: Lyndon Johnson, Robert McNamara, the Joint Chiefs of Staff and the Lies That Led to Vietnam.

House Intelligence Committee Chairman Devin Nunes was prompt to praise McMaster’s “history of questioning the status quo and infusing fresh thinking and new approaches into military affairs.” His experience in Iraq’s Tal Afar is likely to come in useful as U.S. and allied forces attempt to retake nearby Mosul from the Islamic State group.

McMaster, still dressed in uniform, appeared with Trump on a sofa in the glitzy living room of Mar-a-Lago as music played overhead. Trump described McMaster as “man of tremendous talent and tremendous experience.”

“He is highly respected by everyone in the military and we’re very honored to have him.”

McMaster is another name on the long list of Trump advisers who have been plucked from the military. Among others, Trump has named retired officers as his defense secretary and homeland security secretary.

McMaster was most recently the deputy commanding general of the Futures Center at U.S. Army Training and Doctrine Command at Fort Eustis.

Trump said McMaster would work in a “very, very special” collaboration with Keith Kellogg, a retired three-star general who had served as acting national security adviser since Flynn resigned a week ago. Kellogg will act as NSC chief of staff.

The post of national security adviser is a crucial, if discreet, engine for White House power and the smooth functioning of government. Henry Kissinger and Colin Powell are among those who previously held the post.

Current and former staffers fear that under Trump the council is currently being bypassed as political aides like strategist Steve Bannon seize the agenda. They point to an ill-conceived ban on travelers from seven majority-Muslim nations that further complicated counterterrorism partnerships in the Middle East and sullied America’s image abroad, but was ultimately struck down by U.S. courts.

If policy is “being done over dinner with the president, or in Steve Bannon’s office or haphazardly via email or phone calls” said Loren DeJonge Schulman—a veteran of Barack Obama’s NSC—then “they are shooting themselves in the foot because you can’t implement foreign policy from the White House.”

Current NSC spokesman Michael Anton said that although the full NSC—chaired by Trump—had not met since he became president, the deputies and principals committee had.

Peter Feaver, a veteran of George W. Bush’s national security council, said that under current circumstances the administration could struggle to handle crises that have both diplomatic and military components. “Some kind of crisis will be more challenging for this team until they fix their process,” he said.

The more difficult potential problems “that would stress them would be [those where] you have to integration across cabinet, departments and agencies,” Feaver added.