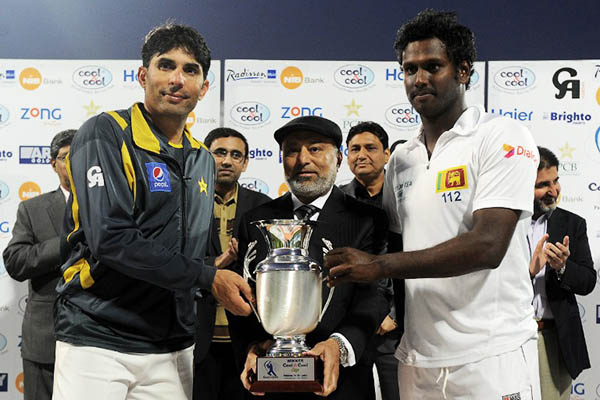 Pakistan clinched a thrilling five-wicket win in the third Test, chasing their second best target in all Tests of 302 with nine balls to spare. That leveled the three-match series at 1-1 and gave Whatmore a winning send-off.

“It was really a much wanted win, especially for Dav (Whatmore). We wanted to win it for him and level the series,” said Misbah of the head coach whose two-year tenure ended after the match.

The former Australian batsman, who coached Sri Lanka to World Cup glory in 1996, took over in March 2012. Under Whatmore, Pakistan failed to win a Test series, losing to South Africa (2013) and Sri Lanka (2012) and drawing the remaining three. But Misbah said his team enjoyed Whatmore’s coaching. “We really enjoyed being with him for all two years. We love you and we wish him all success (in future),” said Misbah.

Pakistan, set five-plus runs per over to win, owed their victory to a brilliant 103 by Azhar Ali, Misbah’s 68/not out and 48 by Sarfraz Ahmed. “It’s a great effort and all the players showed the will to win the game, so I am really happy about the youngsters, Ali’s performance, Ahmed Shehzad’s performance in the first innings and Sarfraz’s performance, Mohammad Talha bowled really well so it’s really pleasing points for Pakistan cricket,” said Misbah, who has been leading Pakistan since 2010.

Sri Lanka were bowled out for 214 in their second innings, which gave Pakistan a chance to force a victory after losing the second Test in Dubai by nine wickets. The first Test ended in a draw in Abu Dhabi.

Misbah said the intent was to go for a win. “There was no pressure, clear message was there when our innings started, we sat together and in the meeting we clearly decided we are going for it at any cost, whether it turned into 2-0 no problem, but we will try to do it 1-1,” said Misbah. He said it was one of his greatest victories. “As a game this was one of my best victories, but still I think I rate our 3-0 victory against England higher, we whitewashed the number one team,” said Misbah of Pakistan’s win over England in United Arab Emirates in 2012. “But the match we won today, I guess we haven’t won chasing like that so it’s an amazing victory,” he added.

Sri Lankan captain Angelo Mathews blamed poor batting in the second innings. “We actually got only 214 and we couldn’t step it up and we couldn’t get a good lead, it wasn’t a 214 runs pitch and that’s where we lost the game,” said Mathews, declared man-of-the-series for his 412 runs in three Tests.

The defeat also deprived Sri Lanka of registering their first away series win in six years. “Yes, it was a great opportunity that we haven’t won a series away since 2008 (in Bangladesh) and we were 1-0 up in the series and sort of needed to bat more in the morning, we went wrong in our batting,” said Mathews. “But we can still take a lot of positives and move on to Bangladesh,” said Mathews of his team’s next tour where they play two Tests, three one-day and two Twenty20s, starting next week.