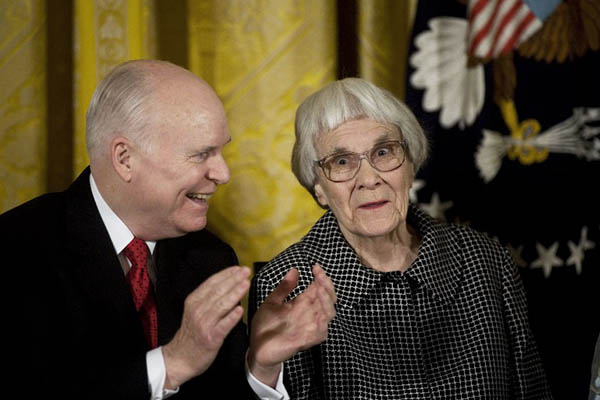 ‘Go Set a Watchman’ is effectively a sequel to the classic ‘To Kill a Mockingbird.’

American author Harper Lee is to publish a second novel, more than half a century after the release of her much-loved classic To Kill a Mockingbird, publisher HarperCollins announced Tuesday.

Go Set a Watchman was written in the 1950s and features many of the same characters as Mockingbird. It was rediscovered last year and will be released on July 14, the publishing house said.

Lee won the Pulitzer Prize for To Kill a Mockingbird—a searing tale of racial injustice in the Great Depression-era South that was published in July 1960. The novel—standard reading in American classrooms for decades—has been translated into more than 40 languages and made into an Oscar-winning film starring Gregory Peck.

Go Set a Watchman was written earlier than Mockingbird but was set aside and presumed lost after Lee’s editor persuaded her to write a novel from the point of view of a young Scout, set 20 years earlier, HarperCollins said.

The reclusive Lee, 88, who lives in her native Alabama, said she was “humbled and amazed” that the manuscript was to be published after so many years, not realizing it had survived. “In the mid-1950s, I completed a novel called Go Set a Watchman. It features the character known as Scout as an adult woman and I thought it a pretty decent effort. My editor, who was taken by the flashbacks to Scout’s childhood, persuaded me to write a novel from the point of view of the young Scout. I was a first-time writer, so I did as I was told.”

She said close friend and lawyer Tonja Carter had rediscovered the manuscript and “after much thought and hesitation,” Lee shared it with a handful of people, who decided it should be published. “I am humbled and amazed that this will now be published after all these years,” she said in a statement.

“I love Go Set a Watchman, and know that this masterpiece will be revered for generations to come,” he said.

In the novel, Scout returns to Maycomb, Alabama from New York to visit her father, Atticus Finch, where she is forced to grapple with personal and political issues as she tries to understand his attitude toward society, and her own feelings about the place where she was born and spent her childhood.

“This is a remarkable literary event,” said Jonathan Burnham, Harper publisher and senior vice president. “The existence of Go Set a Watchman was unknown until recently, and its discovery is an extraordinary gift to the many readers and fans of To Kill a Mockingbird,” he added.

The publishing house said Carter discovered the original manuscript in the autumn of 2014, affixed to an original typescript of To Kill a Mockingbird. But Lee’s reported poor health and the recent death of her sister, who was her lawyer for decades, fed some speculation Tuesday about whether she was vulnerable to some manipulation.

Last July, gossip blog Gawker claimed that Lee suffered a stroke in 2007 and was increasingly blind and deaf, quoting Carter as saying that she sometimes signed things “she did not understand.”

Lee, who rarely speaks to the media, said in the past that she never wrote a follow-up to To Kill A Mockingbird because she feared she could never equal its success.

The new novel will be published by Harper, an imprint of HarperCollins in North America, and by William Heinemann, an imprint of Penguin Random House in Britain and the Commonwealth.

The Trouble With Smartphones