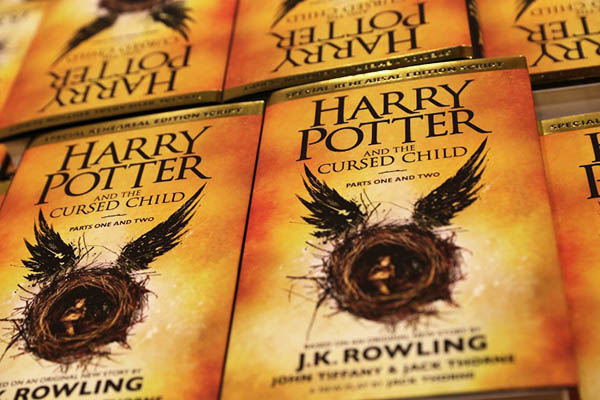 While not as popular as the novels, the ‘Cursed Child’ script boasts the highest single week sales of a script this decade.

The script of a new Harry Potter play is achieving record sales in Britain and the U.S., though it is failing to match the popularity of the novels about the young wizard.

Harry Potter and the Cursed Child has sold more than 680,000 copies in Britain since being published on Sunday, Britain’s highest single week sales of a script this decade. The popularity of the print version of the play in its first two days made it the biggest-selling hardback at bookseller Waterstones since the 2009 release of Dan Brown’s The Lost Symbol.

“By the end of this first week, we expect to exceed The Lost Symbol sales and to match the lifetime sales of our bestselling script book ever, An Inspector Calls by J. B. Priestley,” said Kate Skipper, buying director at Waterstones. “There’s no doubt about it; this will be our biggest book of the year.”

The script of the two-part play, which opened in London’s West End on July 30, recounts the adult life of Harry Potter and his family. The Cursed Child was written by Jack Thorne and directed by John Tiffany, in collaboration with Harry Potter author J. K. Rowling.

In the U.S. and Canada the screenplay sold more than two million copies in the first two days, an “unprecedented” result for a script book according to publisher Scholastic. Despite the success of the script, initial sales of the book fell far behind those of Harry Potter and the Deathly Hallows, the seventh and final novel in the series.

Within 24 hours of being released in 2007, The Deathly Hallows sold 2.65 million copies in Britain, publisher Bloomsbury said, while Scholastic recorded 8.3 million copies sold in the U.S.

Globally the seven Harry Potter novels have sold more than 450 million copies since the first book hit the shelves in 1997. The wizard’s adventures have been translated into 79 languages and eight films.

An additional 250,000 tickets of the Harry Potter play are due to go on sale on Thursday, for performances at the Palace Theatre until Dec. 10, 2017. With speculation that the new play could be taken to Broadway in New York, Rowling said she was enthusiastic about performances abroad.

“I’d love it to go wider than that. I’d like as many Potter fans to see it as possible,” Rowling told journalists at the gala opening.