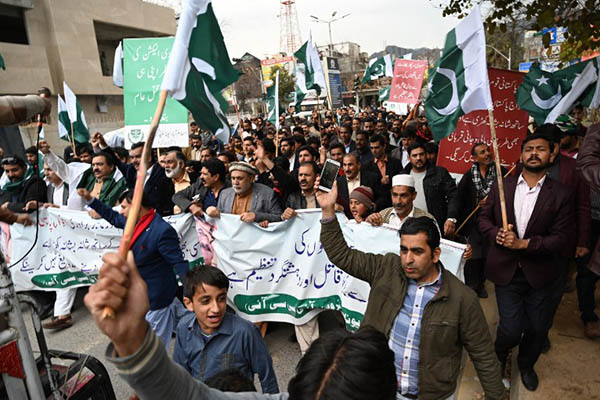 Pakistani traders demonstrate against India during a rally in Islamabad on Feb. 25, 2019. Aamir Qureshi—AFP

Since the Feb. 14 attack on India’s Central Reserve Police Force convoy in India-Occupied Kashmir, India has been winning the war of narratives and by extension the diplomatic offensive. Let me explain.

India has always dealt with Kashmir as an India-Pakistan problem. Pakistan has done nothing to change that perception, Islamabad’s proforma noises about Kashmiris right to self-determination, notwithstanding. Since the nineties and, more aggressively since the noughties, India has also successfully sought to brand any armed resistance against its brutal repression as ‘terrorism’ (a task made considerably easier for it by the post-9/11 situation and the opportunity for India to plug its narrative into the broader United States-led narrative with reference to non-state actors and groups fighting against a state.)

As in the case of the rhetorical subterfuges adopted by the United States, India’s conflation of terrorist non-state actors with peoples fighting for their rights and independence was, and is, deliberate. Over more than a decade-and-half, India’s use and propagation of carefully-selected and crafted words, symbols and images have helped its narrative dominate over weaker parties. In fact, in some cases, India’s rhetoric has been adopted by parties that should be resisting such abuse. Consider.

The attack came when Dar, a 22-year-old local resident, drove his car into a convoy of soldiers and exploded himself. It occurred about 20 minutes from where Dar had lived and suffered his whole life. He targeted soldiers from a paramilitary force notorious for repressing the Kashmiri population. Normally, people should have asked why a 22-year-old would choose to kill his tormentors in such fashion. But such process of inquiry, undertaken without any resort to shameless what-aboutery, would lead one to start looking at the underlying causes, beginning with the Kashmiris’ right to self-determination, the actual issue central to protests in Kashmir. Any such inquiry would also interfere with India’s simplistic imagery and vocabulary of radicalism and terrorism, terms employed to decontextualize violence. Clearly, India cannot allow that to happen, no matter the evidence available showing clearly that the intifada in Kashmir is being driven and carried forward by young, educated Kashmiris—not by any extraneous factors or some form of religious radicalism.

For India’s Narendra Modi and his government, there’s an additional problem: he is looking at an election and he has been talking about his chest. Between Modi and his National Security Adviser, Ajit Doval, they have tried to sell their Op All-out to the rightwing constituency in India. Doval is also on record as having described Kashmir as India’s ‘Pakistan problem.’ Voila! There’s the way out. As Hafsa Kanjwal put it brilliantly in a Washington Post op-ed, “In the midst of jingoistic fervor in India, the root cause of violence in Kashmir—the Indian occupation—is being completely overlooked.”

But the real problem is not so much with how India has waged the war of narratives. It is that we, in Pakistan, have played into India’s hands. Take a look at two paragraphs of the press release after the National Security Committee meeting on Feb. 21:

“The forum noted that the state of Pakistan is not involved in any way, means or form in the said incident. The incident was conceived, planned and executed indigenously. In this regard, Pakistan has sincerely offered investigation of the incident as well as the offer of dialogue on the issue of terrorism among other disputed issues….

“We recognize that terrorism and extremism are the top issues in the region and the whole region including Pakistan have suffered…That is why the National Action Plan conceived and issued in 2014, outlined concrete sequenced measures with consensus of all political parties and institutions of Pakistan. Having addressed direct threat to State of Pakistan, we need to move to ensure that militancy and extremism are routed from the society and the State never becomes hostage to extremists. In this regard, Prime Minister directed both the interior ministry and the security institutions to immediately accelerate actions on ground.” (italics and bold text added)

Offer of dialogue on the issue of terrorism? National Action Plan? Ensure that militancy and extremism are routed from the society and the State never becomes hostage to extremists etc?

This poorly worded press release and its inability to keep the issue confined to Kashmir and Kashmiris right to self-determination boggles one’s mind. What has NAP to do with what happened in Pulwama? What kind of equivalence is being drawn here with reference to Pakistan’s internal issues, including that of terrorism by certain groups? How can any of this be equated with what happened in Pulwama and the basic question with reference to Kashmir and Kashmiris, i.e., “the structural violence that is embedded in the day-to-day lives of Kashmiris living under a military occupation,” to quote Kanjwal?

Whoever drafted the NSC press release needs to do two things: one, understand that language matters and not all press releases should rely on proforma officialese; two, understand the history of Kashmir. The Kashmiris, before India began to repress them, were brutalized by the Dogras.

Next time the Government of Pakistan wants to tackle Kashmir to cut through India’s narrative, perhaps we would like to remember July 1931, the trial of Abdul Qadeer, the thousands of Kashmiris flocking to Srinagar’s Central Jail, standing up to give the prayer call, one after another, and being shot one after another by the Dogra soldiers.

Here’s the point if it hasn’t registered even now: Kashmir is not about terrorism, it’s about a freedom struggle. That struggle predates August 1947 and also the narrative of terrorism post-9/11.

Finally, here’s my advice to GoP: Get a grip on the situation. The only way you can do that is if you really know what Kashmir is about. But to know what Kashmir is about would require Pakistan to do more than go through the motions of standing up for Kashmir. To understand Kashmir, the NSC cannot only rely on Pakistan’s own rhetoric and begin to believe in it. Instead, Islamabad must invite young Kashmiris to brief the NSC and its civilian and military members on the sensitivities of language and history.

You will be surprised by how many top-shelf academics and intellectuals India-Occupied Kashmir and its diaspora have produced. Make use of them and evolve a viable policy instead of helping India’s narrative, even if inadvertently.

If only Pakistan eschews its policy of troublling in Kashmiri waters, India will reach out to the Kashmiri brethren. India is aware of the agony they are going through as they are caught between the security forces and Pakistan-trained fidayeen.

Pakistan was always on denial mode and can rightly be called Denialistan. Did Pakistan accept 26/11 originated from its soil and Ajmal Kasab as it’s citizen at the first instance? Still many Pakistan intellectuals are claiming 26/11 was orchestrated by India. Did Pakistan ever accept armed training camps are run in that country to inflict terrorism in India? The Balakot madrassa is one such institution to produce Jihadis against India. Hence India targeted it.
Many Pakistani intellectuals assert as if India is crushing the Kashmirs. This is false and the army targets those youth who take weapons and indulge in terrorism.
The Kashmir problem can solved if only Pakistan stops terrorists intrusions to India, stops arm and financial support to the the Jihadis is Kashmir.