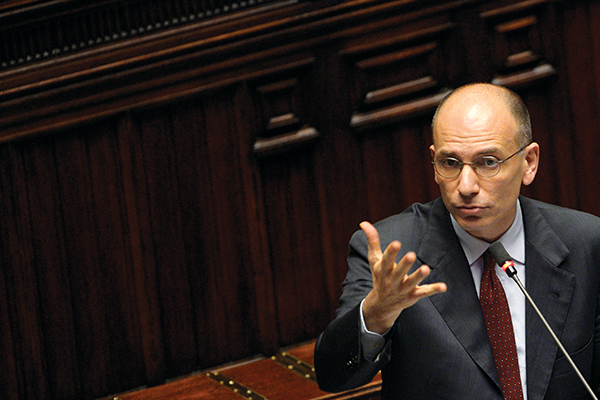 Italy just got itself a new prime minster.

By Italian standards, it was positively expeditious. Only two months after the elections, a prime minister was appointed and handed the unenviable task of forming a workable Italian government.

At 46, Enrico Letta is one of the youngest leaders in Europe and certainly one of the youngest politicians in the country, where the average age of a lawmaker is 59. But these are not the only characteristics that make Letta stand out against the baroque backdrop of Italian politics.

For one thing, he is about as far away stylistically from former prime minister Silvio Berlusconi as one can be. Politically, he is a moderate. Sartorially, he favors unflashy suits and wiry John Lennon-style glasses. And conjugally, he is happily married. Letta also seems to eschew pomp and circumstance. Last week, he drove himself in his well-worn Fiat to the presidential palace to accept the position of prime minister.

“Mine will be a government at the service of the country,” he told reporters, adding that he wanted to bring “morals to the country’s public life, which needs new nourishment.”

Letta, who earned a doctorate in European Community law before becoming a full-time politician and whose résumé includes membership in the Aspen Institute, now faces the daunting task of forming a government. To do so he will have to consult Berlusconi’s party faithful and deal with the enthusiastic supporters of comedian-rebel-politician Beppe Grillo.

But Letta possesses the most important attribute for an Italian pol: family connections.

He is the nephew of Gianni Letta, one of Berlusconi’s most trusted henchmen and political handlers, a man who many believe played a major role running the country while Berlusconi was entertaining hookers and showgirls.

If the younger Letta can use his family clout to win the trust of the center-right, and use his political savvy and modest ways to appease the Grillo gang on the fringe, Italy may just get a chance at having a government again after months in limbo. If not, the only option will be calling new elections, likely for the fall.

“I am appealing to all political forces and their sense of responsibility,” Letta told journalists outside the presidential palace on the Quirinale Hill. “Italians are fed up with these little political games.”