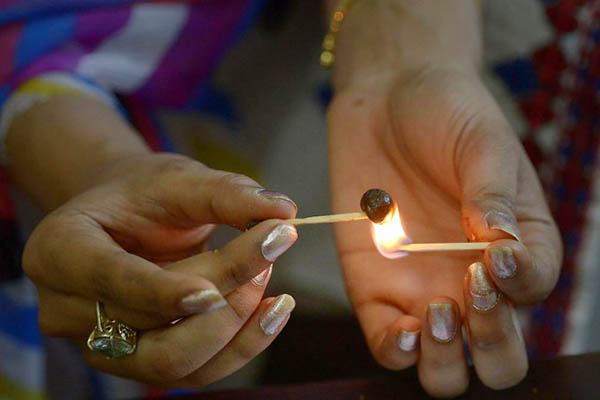 Niaz Ali is a deeply religious man: He prays five times a day and visits the mosque as frequently as possible. But he also loves to smoke hashish—lots of it.

Despite it being forbidden by his faith, the 50 year-old estimates he spends about 30 percent of his earnings as a cab driver on the habit. His love affair with cannabis began as an occasional puff with friends when he was a teenager, but has since morphed into a full-blown addiction for the father-of-nine.

“It is a sacred plant. A sacred intoxication,” says Ali, who asked to use a pseudonym, after taking a fresh rip off a hookah packed with pungent hash in Peshawar. “It’s like a second wife, this addiction,” he sighs.

While Ali freely acknowledges using hash runs counter to the tenets of Islam, he insists it has its advantages. “We know that it is haram but it’s an intoxication that doesn’t harm anyone else,” he explains.

In Pakistan, an Islamic republic, the consumption of alcohol is strictly forbidden for Muslims. Any semblance of a sybaritic nightlife takes place at home behind closed doors, where the country’s elite have been known to quaff booze. But many Pakistanis are surprisingly open to using cannabis, with the spongy, black hash made from marijuana grown in the country’s tribal belt and neighboring Afghanistan the preferred variant of the drug.

Whereas alcohol is explicitly forbidden in Islamic scripture, hash seemingly straddles a theological gray zone, which could explain its popularity in the country. Even if most observant Muslims in Pakistan scoff at the idea of drinking, a prod into their feelings on marijuana often triggers a wry smile followed by a trite maxim about how good it makes food taste or how restful sleep can be after a toke.

People have been smoking hash on the subcontinent for centuries. It predates the arrival of Islam in the region, with reference to cannabis appearing in the sacred Hindu Atharva Veda text describing its medicinal and ritual uses.

According to a 2013 U.N. survey, cannabis was the most widely consumed drug in Pakistan with around four million users, representing 3.6 percent of the population—a figure that has drawn skepticism in a country where reliable data can be hard to come by.

Despite its widespread consumption, not all are happy about hash’s prevalence in the so-called “Land of the Pure.”

“There is no compromise with hashish,” says Maulana Mohammad Tayyab Qureshi, the imam of the main Peshawar mosque. According to Qureshi, anything that causes intoxication or bodily harm is strictly forbidden in the faith. He chalks up marijuana’s popularity in Pakistan as a law enforcement issue.

Public health experts also warn the ubiquitous availability of cheap hash in Pakistan’s northwest has been especially harmful to impoverished children, who increasingly use the drug to deal with the hardships of poverty and trauma from years of militant violence. “For children, it’s the drug of choice,” says Dr. Khan, blaming the vicious nexus between the region’s narco-funded insurgencies and widespread drug use for the scourge.

Pakistan also remains wholly unequipped to handle the problem, with the U.N. survey saying a dearth of treatment clinics and prohibitive costs keeps users from seeking help. But in Islamic shrines salted across the country others see cannabis as more benign.

At the Bari Badshah shrine in the heart of Peshawar, followers of the Sufi sect of Islam gather in a small courtyard nightly, where they smoke copious amounts of hash and listen to devotional music while draining tea by the kettle. Conversations are fluid, only to be interrupted by hard drags off hash pipes with the occasional song performed by one of the devotees.

“The basic work of hash… it wakes up new corners in your mind,” says Mohammed Amin, 50.

According to Sayeed Asjid, 27, such shrines are welcome to members of any faith and in Peshawar are frequented by high-level bureaucrats, police officers and members of security agencies. “It’s a deep relaxation,” says Asjid of the cannabis high as he exhales clouds of marijuana smoke.

But Sufi shrines have been the frequent target over the years by Taliban militants and sectarian extremists like the Islamic State group, who view the mystical sect as heretical. “That was only to spread fear and havoc,” says Asjid of the attacks, while expressing his faith in the power of the shrine to protect.

The herb is not only enjoyed by free-spirited Sufi mystics.

Mehwish, a single mother of three, says the occasional joint helps manage the stress that comes with the daily grind. “You can use hash when you are alone… then you can think in a relaxed way,” says Mehwish, whose name has been changed on request.

Although she admits most of her family is unaware of her habit, the 26-year-old is a firm believer in its benefits. She adds: “When you feel good and you’re active and it puts a smile on your face then nobody minds.”