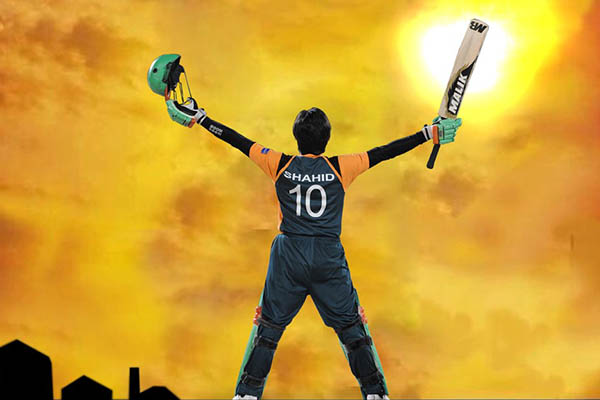 Pakistani film inspired by career of cricketer aims to capitalize on success of sports-centric movies.

A Pakistani film inspired by the fairytale career of cricket star Shahid Afridi will be released next month, focusing on a heartwarming tale of raw talent that producers believe will be a smash hit.

Pakistan’s film industry has been on the skids for years, unable to compete with India’s Bollywood, but filmmakers hope the phenomenal popularity of one of the country’s best-loved cricketers will translate into takings at the box office.

Main Hoon Shahid Afridi (I Am Shahid Afridi) is about a young boy who dreams of becoming as great as the cricket star and chronicles the ordeal he faces en route to playing like his idol.

Producer and actor Humayun Saeed initially persuaded Afridi to take the lead role, but the 33-year-old said it violated the traditions of his tribe on the Afghan border. “They offered me the role but my elders didn’t let me act as it is against our traditions, but I happily give permission to use my name as this film will give a positive message,” Afridi said.

Saeed said the film, which cost around $1 million to make, would be released in Pakistan over Eid, as well as in the Gulf and in India. “It’s an underdog story which centers on the game of cricket. It’s all about wealthy versus poor, who both try to make a name in cricket but the passion of the poor wins the day,” Saeed added.

India has had successes in recent years with films based on sports-related plot lines, like Iqbal, based on the real-life story of India’s World Cup winning paceman Munaf Patel.

Afridi, who enthralls crowds the world over by hitting big sixes, has so far played 27 Tests, 354 one-days and 59 Twenty20 matches for Pakistan in a career with fairytale beginnings. When he was just 16, Afridi was sent to Kenya as a replacement to play for Pakistan’s team. He became an instant hero when he hit a 37-ball century in only his second one-day against Sri Lanka in 1996—still a world record. Afridi also holds the record for hitting the most sixes in one-day international cricket with 308 in 354 matches.

He was last week recalled to Pakistan’s team for a limited-over series in the West Indies starting on July 14.