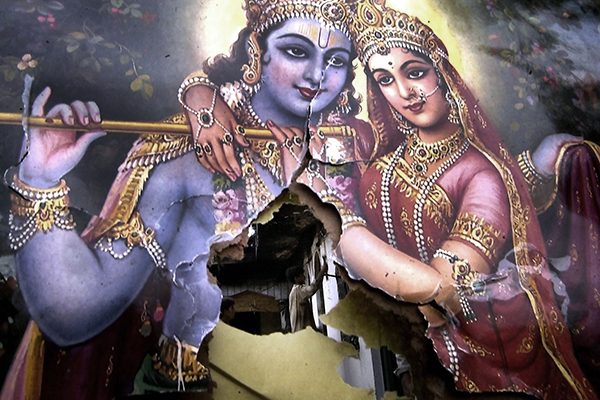 No one has yet claimed responsibility for the killing.

Two gunmen shot dead a policeman standing guard outside a Hindu temple in Peshawar on Sunday and fled the scene.

“It appears to be a militant attack. The gunmen on a motorcycle killed the lone policeman on duty outside the Hindu temple and then escaped,” said police official Faisal Mukhtar.

No one has yet claimed responsibility for the policeman’s killing.

The attack, which occurred in the downtown Jhanda Bazaar area, was the latest to target Pakistan’s minorities, who make up some 2 percent of the country’s 180-million population. Hindus are thought to number a few thousand in Peshawar, Pakistan’s frontline city in its battle against Al Qaeda and Taliban militants, though the community is rarely targeted.

Last November, a policeman standing guard outside a Pentecostal church in Peshawar was also shot dead by unknown gunmen. In September, devastating double suicide attacks at the historic All Saints Church in Peshawar left 82 people dead.

Since the start of the year, militants have stepped up attacks across the country. The Nawaz Sharif government, which wants “peace” talks with the terrorists, has grudgingly authorized limited armed action against terrorists in Karachi, North Waziristan, and in Balochistan province.

Every person on this earth should be treated as humans as we are humans first and next is the religion.Hope the mankind will move to the positive side.

We sholud always respect each other religion. As we are humans first. We all have one bloodand we should stay together like brothers and sisters. In our village many muslims also read hanuman chalisa lyrics and Hindus quran.