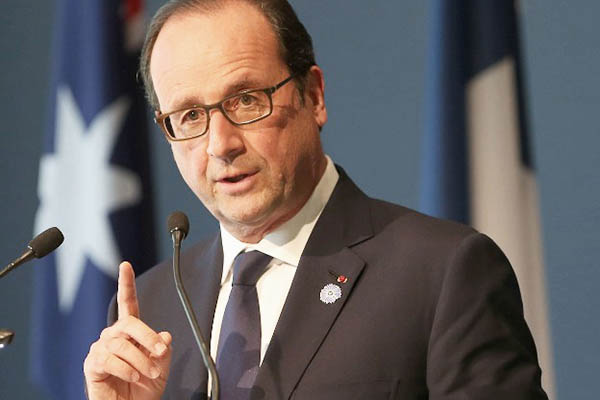 French President Francois Hollande on Wednesday confirmed that two Frenchmen had been identified as suspects in an Islamic State video showing the beheading of Syrian prisoners, while slamming “brainwashing” of the young.

The men are seen in the brutal clip released by the I.S. group on Sunday, which features the killing of 18 Syrian prisoners and a U.S. aid worker. “All we can say for now is that there were two French people,” Hollande told a press conference in Canberra alongside Australian leader Tony Abbott. “One has been categorically identified and the other one is in the process of being identified.”

French prosecutors have confirmed the first was 22-year-old Maxime Hauchard from Normandy in northern France but the identity of what they said was a possible second Frenchman was not given. Hollande said it was not clear exactly what role the men played in the beheadings and that “the judicial system will have to establish this.”

French Interior Minister Bernard Cazeneuve said in Paris that Hauchard left for Syria “in August 2013 after a stay in Mauritania in 2012,” after reportedly becoming radicalized online. Around 1,000 French nationals are thought to have taken part in the conflict in Syria and Iraq, with 375 currently there, the government has said. At least 36 have died.

Hollande, the first French president to make a state visit to Australia, said the issue of foreign fighters and how they were being “brainwashed” was a major concern. “They could be from any background, from any ethnic origin—but they easily can be brainwashed into becoming converts, and this is a very important matter,” he said. “We must be vigilant, and we must be strong.”

Like the United States, Britain and other nations, authorities in France are increasingly worried about the number of citizens traveling to fight in Iraq and Syria who could potentially come back and stage attacks in their home country.

Earlier this month, Paris adopted an anti-terrorism law which will slap a travel ban on anyone suspected of planning to wage jihad and Hollande said it was crucial that the full force of the law is used on those opting to fight overseas. “What is very important is not just reducing the number and avoiding new ones [foreign fighters], but have some sort of penalty applying to those who went to these areas because if you go to a combat zone it is something that should be subject to sanctions and penalties within the law,” he said.

During his trip to Australia, Hollande has also voiced concern about the impact that “extreme horror” films used by terrorist groups is having on young people.

Australia faces a similar scenario to France with at least 71 Australians currently fighting in Iraq or Syria with 15 having been killed—two of them as suicide bombers. Abbott said the subject was discussed during their bilateral talks and that more collaboration is needed, “particularly when it comes to intelligence sharing on the question of foreign fighters.”