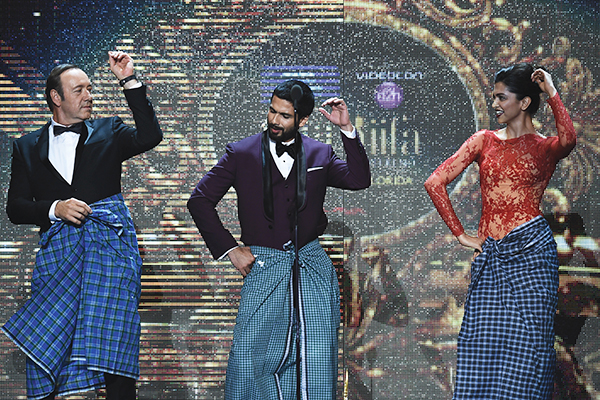 Kevin Spacey and John Travolta joined the Bollywood elite last month to celebrate the Indian film industry at the International Indian Film Academy awards. Hosted by actors Shahid Kapoor and Farhan Akhtar, this was the first time that the IIFA awards were held in the U.S. But while the Bollywood celebrities were the main draw, it was the dance numbers featuring the Hollywood actors that stole the show. Travolta pulled out his signature moves from Pulp Fiction as he joined Priyanka Chopra on stage in a performance for “Tune Maari Entriyaan” from Gunday. After the dance number, Bollywood heartthrob Hrithik Roshan presented Travolta with an award for Outstanding Achievement in International Cinema. Spacey, a two-time Oscar winner, was on hand to present the award for Entertainer of the Year but was later pulled on stage as well. Donning a sarong, he joined Kapoor and Padukone for the “Lungi Dance” from Chennai Express. “It is great to be here and seeing the performances. I am thankful to IIFA,” he told journalists. The ‘Bollywood Oscars’ were recorded and will air in June, according to IIFA, which noted that some 800 million people are expected to watch the broadcast.