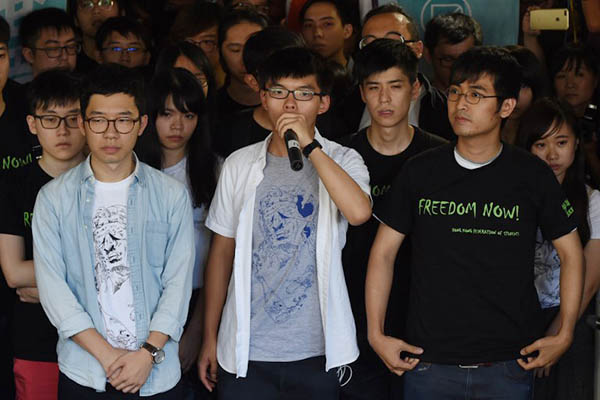 Joshua Wong and two other young leaders of Hong Kong’s huge Umbrella Movement rallies were jailed on Thursday for their role in the 2014 pro-democracy protests, dealing a fresh blow to the campaign for political reform.

The sentences handed down by the city’s Court of Appeal came as fears grow that Beijing is tightening its grip on the semi-autonomous city and that rule of law is being compromised.

Wong, who became the face of the mass protests while still a teenager, as well as Nathan Law and Alex Chow were given terms of six months, eight months and seven months respectively after the court upped their previous non-custodial sentences. “The court has a responsibility to send out a clear message to society, that in activities such as rallies, marches and protests, when rights are freely exercised, participants must abide by the law,” the judgment said.

Anyone who receives a jail term of more than three months is barred from running for Hong Kong’s partially directly elected parliament for five years. Wong turns 21 in October, which would have made him eligible to run for lawmaker, something he had said he wanted to do. As he was led away by security, Wong shouted: “Hong Kong people, don’t give up!”

Law, 24, was voted in as a legislator by the public last year, winning 50,000 votes in what was seen as a victory for the democracy movement. But he was disqualified last month along with three other pro-democracy lawmakers for inserting protests into their oaths of office. That decision came after an unprecedented intervention from Beijing demanding oaths are “solemn and sincere.”

Beijing has become increasingly incensed at the emergence of independence campaigners calling for Hong Kong to split completely from China, a response to the failure of the Umbrella Movement to win reform. Chinese President Xi Jinping warned any challenge to Beijing’s control over Hong Kong crossed a “red line” when he visited the city in July to mark 20 years since it was handed back to China by Britain.

Wong and Law’s party Demosisto said after the sentencing that Xi’s rise had led to growing restrictions on civil and political rights in Hong Kong. But pro-Beijing lawmaker Regina Ip called the terms “reasonable and appropriate” as the Umbrella Movement protests had “seriously undermined Hong Kong’s law and order and stability.”

Hong Kong enjoys much greater freedoms than on the mainland, with its liberties enshrined in the handover agreement. But there are growing concerns Beijing is trampling the deal.

The Umbrella trio was found guilty last year on unlawful assembly charges for storming a fenced-off government forecourt known as “Civic Square” as part of a protest calling for fully free leadership elections in September 2014. Their arrests sparked wider rallies which exploded two days later when police fired tear gas on the crowds, triggering mass demonstrations that brought parts of Hong Kong to a standstill for more than two months in an unprecedented challenge to Beijing.

Wong and Law received community sentences and Chow a three-week suspended sentence at magistrates’ court last August over the Civic Square protest. But Hong Kong’s justice department then sought to increase those terms, with prosecutors arguing they should receive harsher punishment.

There have been a raft of cases brought against participants in the largely peaceful Umbrella Movement, but only one prominent activist has ever been jailed, for just five weeks.

Defense lawyers argued the trio had insisted on non-violence including at Civic Square, where there was pushing and shoving between protesters and police. But the judgment said “not hitting someone” did not equate to non-violence and that the original sentences were too light.

Emotional pro-democracy supporters chanted “Hope is with the people! Change starts with resistance!” while pro-Beijing supporters shouted them down through loudspeakers outside court after the sentencing.

Chow’s father said he supported his son. “We feel that the things he’s done were for the Hong Kong people and Hong Kong’s future,” he told reporters.

The justice department said in a statement on Thursday morning that there was “absolutely no basis to imply any political motive” on its part in relation to the case. However, Amnesty International slammed authorities’ pursuit of jail terms as a “vindictive attack on freedom of expression and peaceful assembly.”

In a move likely to rile Beijing, Taiwan condemned the sentences—its latest gesture of solidarity with Hong Kong’s pro-democracy movement. The top policymaking body in the self-ruling country, which China sees as part of its territory, issued a statement reaffirming Taiwan’s “long-standing stance to support Hong Kong people to pursue democracy, freedom, the rule of law and human rights.”