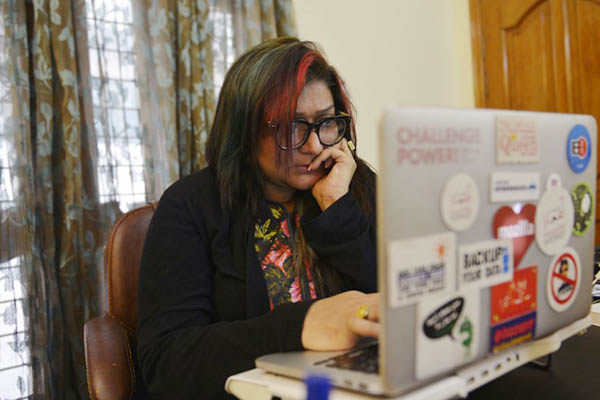 When Pakistani social media starlet Qandeel Baloch was found strangled, a crime to which her brother proudly confessed, thousands of women posted messages denouncing her murder—only to face abuse and threats themselves.

Nighat Dad, a human rights activist who founded Digital Rights Foundation, which advocates for free speech and against harassment, said her phone began ringing off the hook with women seeking advice, fearing they could be targeted next. She had offered counseling and legal guidance to such victims since setting up her organization in 2012. But the volume of requests shot up after Baloch’s murder last summer.

In an effort to deal with this fresh wave, Dad decided to create a hotline in December that began operating from her office in Lahore and now handles up to dozens of calls a day. The result—a safe space for Pakistani women in the patriarchal and religiously conservative country, where online threats sometimes translate into offline violence.

No case epitomizes this phenomenon better than that of Baloch, a polarizing figure who had gained an online following of millions for her daring selfies and provocative videos, including one attacking politicians for discouraging Valentines day. It was too much to handle for her brother Waseem, currently on trial for her murder, who cited her “intolerable behavior” as the reason behind his crime—one of around a thousand so-called honor killings that take place in Pakistan every year.

The risk is especially high for women from conservative backgrounds, who can at times be blackmailed for even having an account on Facebook or using their real picture. Another common problem is the issue of sexual blackmail—including when a boyfriend seeks nude or semi-nude photos from his girlfriend and later uses the material to manipulate her, threatening to release the images if she does not comply with his demands.

Eman Suleman, a 25-year-old undergraduate student at Lahore’s Beaconhouse National University, found herself at the receiving end of a concerted hate campaign when she and her fellow students put together an exhibition featuring bloodied menstrual pads to spark a conversation about periods. Instead of the passionate debate they had hoped for, they received threats.

“These anti-secular pages started putting up pictures of us with our personal information then people started messaging us with threats like burn them,” she said. “We were really disturbed because of the reaction and because of the messages we were getting and we didn’t know what to do.”

Their parents asked them to stop going to school out of fear they could be attacked. Suleman then got in touch with activist Dad, who was able to draw on past experiences to offer a non-judgmental perspective and provide her with emotional support as she rode out the torrent of abuse.

She said: “Every time I used to sit in a car I used to look around all the time if there is a motorbike passing by me, are they going to pull out their gun and shoot at me. Because you don’t know in this country, you don’t know what limits you have crossed… because they kill you for everything.”

For Dad, helping the vulnerable makes her work worthwhile. A lawyer by profession, the 35-year-old single mother has championed the cause of women in the online space for almost a decade, and last year received the Atlantic Council Digital Freedom Award and the Dutch government’s Human Rights Tulip award for her pioneering efforts.

“In the beginning we wanted to just let people know that there is a support available to them and they don’t need to be silenced,” she said. Now however, she also directs victims toward legal remedies.

Last year Pakistan passed its first cybercrime bill, which regulates the limits of free speech online and was criticized by many activists who said it would stifle genuine dissent. But the bill also contains provisions covering online harassment, stalking, identity theft and blackmail, with offenders facing up to a year in prison or a fine. But its enforcement remains in question. Pakistan’s weak prosecution system means serious criminals are often let go, sometimes after bribing the police.