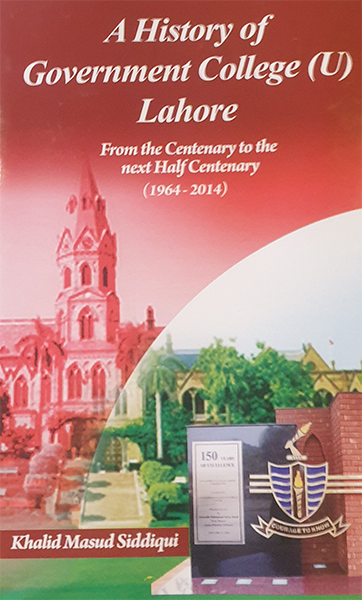 A history of the ups and downs of Government College University, as told by a former student-turned-teacher

A History of Government College (U) Lahore: From the Centenary to the next Half Centenary (1964-2014) by Ravian-teacher Khalid Masud Siddiqui seeks to update, through 2014, the history of Pakistan’s most valued place of learning. It picks up from 1964, where a previous text A History of Government College Lahore (1864-1964) by H.L.O. Garret and Abdul Hamid had left off. Siddiqui has done a good job of it, reading and quoting from such college sources as quarterly magazine The Ravi and the weekly College Gazette.

“I was admitted to the College in 1952 in the First Year,” he writes in the book as an introduction. “I lived in the Quadrangle (Iqbal Hostel) and the New Hostel and had a measure of life at the College. Later I taught here for 27 years; and when I retired from Government Service, I was residing in the same Hostel, now as the superintendent of where I had begun 45 years ago. I had thus drunk in the Government College lore long and deep,” he adds.

In January 1964, Government College completed 100 years since its inception and entered its most momentous phase, which saw the College burgeoning into the accredited “GC University” of today. Its origin was far more humble.

Temporarily housed in a portion of Haveli Dhayan Singh, the Government College opened in January 1864 and initially comprised nine students working for matriculation from Calcutta University. The College moved into its present location on the Lower Mall in 1876.The building, with its Gothic structure, that according to John Ruskin is the ideal architectural design for educational institutions, was completed in 1877 at a cost of Rs. 320,000.

Siddiqui talks of the people associated with his alma mater before it became a university. W. Leitner of the Freiburg University was the founding principal: “One could not have asked for a more remarkable Head of Institution. Just look at his antecedents: a Hungarian Jewish émigré in Turkey where he completed his Islamic studies in a Theological School. Later, he worked as Professor of Arabic and Islamic jurisprudence at Kings College, London. He was perhaps the only Orientalist who could recite a major portion of the Quran orally.”

Of the great principal Guru Dutt Sondhi he writes: “Sondhi was the first old boy of the College (1905-11) to become its principal. A keen sportsman and thespian, he led a movement of the open-air theater, organized some international teams and worked incessantly for the Government College Dramatic Club. At his retirement in 1945, Sondhi became Sports Adviser to the Government of India. The abiding gifts of Sondhi to the city of Lahore are two open-air theaters, one at Government College and the other at the Lawrence Gardens.”

He adds vignettes about Ahmad Shah “Patras” Bokhari (1947-50) who became principal “in turbulent times.” There was turmoil in the city, burning and looting everywhere, “the non-Muslims fleeing the city, the refugees pouring in.” The College was closed. It wore a forlorn look. With the exodus of non-Muslims, its staff vas reduced to a dozen or so. In the post-Partition period it was Prof. Sirajuddin who, in his era as principal (1950-54 and 1955-58), left a deep imprint on the College. A brilliant old student of the college, Sirajuddin had endeared himself to the students as a teacher. In 1950, he was considered to be one of the best teachers in English Literature in the country.

There is also reference to Nazir Ahmad (1959-65), unassuming and unorthodox, opposite of the typical, circumspect head of institution. This is how Prof Rashid, who succeeded him, described him” “His long hair and fancy shoes made in Multan represent an individual with an utter disregard for convention and middle class manners. He would ride on horseback to college as principal and have dinner in a roadside food joint. He will be remembered for his humane approach, liberal philosophy and emphasis on interdisciplinary studies.”

However, Nazir’s over-indulgent attitude affected College discipline. There were scenes of unprecedented violence at the Young Speakers Union debates, much lamented by teachers and Ravians, young and old. In 1963, the College had 2,754 students and 146 teachers while the presence of Intermediate classes in the College was being questioned.

The College completed 100 years of its existence in January 1964. Thomas Arnold of the M.A.O. College Aligarh, Allama Iqbal’s mentor and teacher, had joined the College in 1889 and left in 1904. Allama Iqbal studied under him. There is no record of how the teacher and his gifted pupil interacted. In 1902, Iqbal was appointed additional professor of English at GC for six months. He was reappointed in 1905 after which he left for England for higher studies. When he returned in 1909, Iqbal officiated as Professor of Philosophy for some time.

But it was eventual principal Patras Bokhari, a student from 1919 to 1925, who was truly a trendsetter. He was editor of The Ravi from 1919-20. In the words of Imdad Hussain, “It can be said without exaggeration that the tradition of the Ravi, indeed of the GC itself, would have been different without Bokhari. He was not only humorous, but like Falstaff, the cause of humor in others.” In an editorial of The Ravi, Bokhari was described as “the most illustrious humorist that The Ravi has ever known. He went to Emmanuel College Cambridge and became the second Indian to obtain a first class in English tripos and was elected senior Scholar of Emanuel College.”

It was under Principal Khalid Aftab that the College became a University. He was the last principal of GC from 1993-2002. An old Ravian, he became principal on Jan. 17, 1993 after having taught at the varsity and served as Chairman of the Department of Economics. His father and grandfather had also been Ravians. Author Siddiqui records: “He not only had a deep sense of the past as it related to the College and a devout interest in preserving its physical and cultural landmarks, but also had a clear-eyed cognizance of the challenges of the future, as well as well-thought-out plan of action to address them.”

In September 1993, it became mandatory for students to don the College uniform that had been almost abandoned under earlier principals. Aftab’s services to education were recognized by the Government of Pakistan, which conferred an Azaz-e-Fazeelat medal on him. Under his guidance, the College became a University and he was appointed the first vice-chancellor, holding a Ph.D. in Development Economics from Strathclyde University, Glasgow.

In 2010-2011, GC University was rated the best university in Lahore and the second-best in Punjab by the Higher Education Commission. That year, it produced 282 research papers compared to the 269 of the Punjab University. Zaheerud Din of the Botany Department was declared the best teacher for the year 2010. The next year, Aftab retired as vice-chancellor. His exit led to a period of chaos: in the 17 days after he stepped down, the varsity had 10 Vice Chancellors. Finally, Ikramul Haq, a noted bio-technologist who had been working as Dean of the Faculty of Science and Director of the Institute of Bio-technology, was made acting VC.

The span of this book concludes with Khaleequr Rehman’s tenue as vice-chancellor; the third to assume the post, his tenure lasted from 2011-2015. Rehman hailed from the University of Engineering and Technology, where he had been chairperson of the Physics department.

Originally Lahore’s premier college, the GCU has fared well in comparison to Lahore’s other historical landmark, the Punjab University, while keeping alive the “Ravian” tradition of the “College.” Author Siddiqui has made his account of the 50 years comprising 1964-2014 into a reference book where all information is footnoted for authenticity. It now stands as record and will no doubt ensure his efforts for the College/University will be remembered forever.