How Speculators Could Help Pakistan 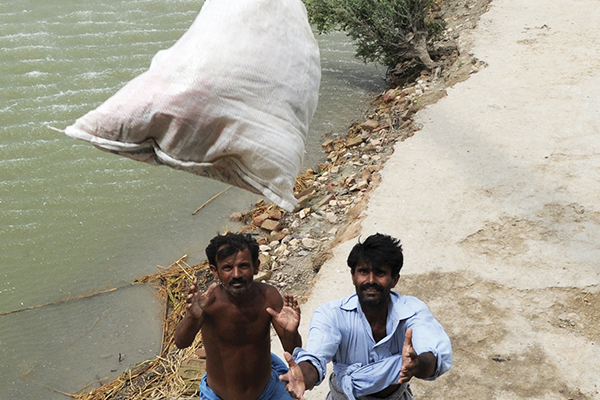 A new tax on obscure currency trades could pay for aid in the world’s hotspots.

[dropcap]F[/dropcap]rom the earthquake that ended the lives of 230,000 Haitians to the historic floodwaters that are putting nearly 14 million people at risk in Pakistan, it’s a tumultuous year for the developing world and a trying one for the leaders of wealthy nations trying to help them. Those leaders could be forgiven for disaster fatigue if the Pakistan floods—which would cover much of England—weren’t the worst natural catastrophe in modern history, according to the United Nations’ humanitarian office. (A spokesman there recently declared that the ongoing floods, in which 1,600 have already died, are far “worse than the tsunami, the 2005 Pakistan earthquake, and the Haiti earthquake” combined.)

The international response has proved lethargic at best. One billion dollars was pledged within 10 days of the earthquake in Haiti, and far more following the 2004 tsunami. Four weeks into the disaster in Pakistan, by contrast, just $643 million has been promised—and that was thanks only to a surge in humanitarian generosity over the last 10 days.

The weak response highlights a global quandary: how do we find a systemic way to respond to large-scale disasters? The current system is anchored in emotional aid decisions driven by wrenching news footage, geographic proximity, and general feelings toward specific countries or regions. If there are no striking images—or if they take a while to surface in the press—aid tends to be slow, if it comes at all. Then consider the general sympathy deficit that much of the West feels for Pakistan (and perhaps vice versa), and this slow-moving summer catastrophe could only have ended with millions of desperate men, women, and children fighting for their own survival.

Yet a global response is hardly impossible. Philippe Douste-Blazy, the U.N.’s wonky undersecretary-general for innovative financing, recently told Newsweek about a systematic and methodical way to pay for this kind of disaster response. He argued that it could be done quickly, effectively, and—thanks to tens of billions of dollars in new annual revenue—without adding to bloated government deficits or hamstringing the fragile global economy.

Where could that much cash come from? The easy answer: currency speculators who seek quick profits from rapid, high-volume trades without contributing much, if any, capital to the economy. Currency speculation is a strange fantasyland. Interbank currency-exchange transactions add up to an unimaginable sum, somewhere in the neighborhood of $900 trillion per year. (That is 15 times the earth’s gross domestic product, and 35 times its global commerce total.) A recent U.N. report indicates that more than 97 percent of such transactions are purely speculative (though it doesn’t define the term).

Speculators do it like this: they quickly shift money back and forth between currencies, thanks to an automated bank-to-bank exchange system, as they try to profit from decreases or declines. A bank might sell enough yen to purchase 1 million euros during a particularly volatile time, as during the recent Greek economic crisis, and sell them back two weeks—or two days—later at 1.1 million. Short-term gambles mean that speculators can quickly switch their currency bets again and again, allowing larger profits but also multiplying their own potentially destabilizing impact on currency markets. A Wall Street trader, who prefers to remain anonymous to protect his job, noted that some currency hedging might appear to be speculation when in fact it can be linked to constructive transactions. That said, he acknowledges, “there is certainly an element of the same potato being moved around” in currency markets.

‘In Pakistan, fundamentalism and radical behavior are nourished by extreme poverty. We have to respond intelligently.’

Douste-Blazy’s innovative plan—which he will push to key world leaders (a number of whom have already expressed support) at the U.N. General Assembly in September—would involve placing a “microfee” on large-scale currency transactions between banks. A tax of 0.01 percent per transaction—that’s $1 for every $10,000 exchanged—would likely be too small to deter speculators. (That fee is less than one 50th of the commission that you and I generally pay when changing currency at an airport.) If applied to interbank trades of the world’s four most exchanged currencies—the dollar, euro, yen, and British pound—it could raise approximately $40 billion annually, according to a 2007 bank industry study.

A charge like this is quite easy to apply, it turns out. The Continuous Linked Settlement (CLS) Holding Group has, over the last decade, become a one-stop shop for the majority of currency exchanges between major banks in 17 currencies. In Europe, the CLS already deducts a tiny fee of 0.25 euros from every currency transaction involving euros that goes through its system, to support the technological and human infrastructure that allows banks to trade with each other at guaranteed rates. A similar fee is applied by the other major currency exchanges elsewhere. Adding the new levy would require adapting the system from its current fixed fee to a proportional one that would absorb a minute percentage. An array of top finance officials in Germany, France, and the U.K. have acknowledged the technical feasibility of such a change, and some have gone further.

In May, German Chancellor Angela Merkel came out strongly in favor of some sort of a transaction tax, in part to stabilize frantic international markets, and her finance minister, Wolfgang Schäuble, said that if other countries blocked it, it should still be done regionally. “If we can get that through on the global level, then good. That would be ideal,” he said before a German parliamentary committee. “If that does not work, then we must look to the European Union. And if we have a problem with Britain, then I think we should try it with the euro zone.”

Such a small fee would not have any major effect on currency speculators. Nobel Prize-winning economist James Tobin recommended (as far back as 1972) appending an identical fee on all financial trades conducted through major currency-transaction clearinghouses (a panel of members from different banks to make sure that they respect certain exchange parameters), which could raise $300 billion annually. But the more timid proposal advocated by people like Douste-Blazy is less threatening to the banking industry—and surely proves more palatable to decision makers. As a Wall Street trader at a prominent private-equity firm explained, “Someone who has traded currencies their whole life won’t change what they do because of this.”

Politically, the tax wouldn’t be very hard to implement. Proposals are being discussed or put forward in the U.K., Japan, the U.S., and in a number of European capitals, where several top economic officials have noted the potential of a currency-transaction levy. (Douste-Blazy cites explicit support from the governments of Germany, France, Norway, Spain, Belgium, and Ecuador, while Brazil has long been a supporter of a currency levy.)

French President Nicolas Sarkozy has brought up the idea at G8 and G20 meetings as a way to fund developmental assistance. President Sarkozy, Chancellor Merkel, and former British prime minister Gordon Brown have all praised some sort of a currency transaction levy. The current British prime minister, David Cameron, and the Obama administration have yet to offer any clear indication on the issue (although U.S. House Speaker Nancy Pelosi has expressed support, and Cameron has already announced a new tax on bank profits). And in July, California Rep. Pete Stark introduced the Investing in Our Future Act, which would put a 0.005 percent fee on dollar currency transactions to provide billions in new revenue to facilitate affordable child care in the U.S., and health- and climate-related responses for impoverished people overseas.

To put things in motion, participants don’t need the accord of the U.N.’s 192 General Assembly members. Though it is unlikely at this point, the 27 countries of the European Council could come to a consensus on the issue, or any of the top G7 governments—Japan, the U.K., or the U.S.—could simply have a fee added on automated bank-to-bank exchanges involving their own currency. Similarly, individual institutions could put such a levy into place voluntarily to improve their reputations, much as “green” companies highlight their environmental bona fides. “This is such a small percentage. The banks have a bad enough reputation at the moment that they should just accept this,” says Douste-Blazy. “That 0.01 percent can be the difference of life and death for a lot of people.”

There are compelling arguments that such funds should be dedicated to preventing another banking meltdown, or to help balance government budgets (where it wouldn’t go far). But the greatest human impact would surely involve targeting dire health emergencies, such as those that follow natural disasters like the floods in Pakistan or those created by poor living conditions: mosquito-borne illnesses, water-based ailments, a lack of basic vaccines.

But who would administer the money and how would it be spent? The major currency-exchange clearinghouses would transfer the levy funds to a structure that has not yet been defined, Douste-Blazy says. Such a bureaucracy should include representatives of the public and private sectors, as well as nongovernmental groups, international organizations, key foundations, and perhaps even the banks themselves (as advisers). They could meet periodically with an array of health and emergency experts to decide where the money should be used, hearing proposals from international organizations and foundations. “The world can’t continue like this,” argues Douste-Blazy, a cardiologist who has been a minister of foreign affairs and of health in center-right governments in France. “Look, I am in favor of capitalism. I am not for welfare. But … in Pakistan, the fundamentalism and the radical behavior is nourished by extreme poverty,” he says. “We have to respond intelligently.”

Beyond the issues of dignity, news reports have emerged in recent weeks that radical extremist groups are exploiting the Pakistani government’s ineffectiveness and the international community’s unsatisfying response. Douste-Blazy notes that without a more satisfying international answer to such epic catastrophes, it becomes easier for those extremists to turn their homeland into the next Afghanistan. As Douste-Blazy prepares to visit the U.N. in September, his plan is on the table.