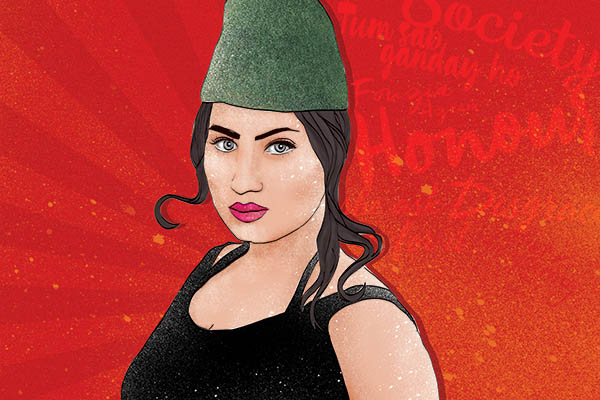 Sanam Maher has written a brave book, The Sensational Life and Death of Qandeel Baloch, on a maverick social media celebrity strangled to death in 2016 by her own brother to redeem the honor of his dirt-poor, mud-house-dwelling family.

Qandeel was born in 1990 into the family of a peasant in Shah Sadar Din village in Dera Ghazi Khan district of Multan division. She had many brothers and sisters growing up in an environment that has been described by the Asian Development Bank as “the least developed division of Pakistan, with more than 50 percent of the population below the poverty line.”

She had hardly started going to school when she was married off at the age of 12 to an oaf who beat her to validate his manhood till she was forced to leave him and her born-between-beatings son. In time she ran away from Shah Sadar Din, deciding to survive the challenge of her foredoomed life. She became rebellious, refusing to accept passively the values she was expected to uphold as a receptacle of honor in a dehumanized culture.

She stumbled upon the entertainment scene, provocatively dressed as a model and a “morning show guest” that less rebellious actors like Mathira lived off. She started from Islamabad and moved to Karachi after she caught the attention of more permissive producers in the showbiz world.

While she is most famously known for her Qandeel Baloch sobriquet, she was born Fauzia Azeem. According to the book, she changed her name to sound more upper crust. She quickly seized upon a formula for popularity that has long been in vogue across the world: sexual provocation. Appearing in seductive videos that quickly went viral on the Internet, she achieved true stardom in 2015 when she was included in Google’s list of the “top 10 Pakistanis most searched for online.”

As her fame grew, so did her options. “Respectable” TV shows that once shunned her now wanted to highlight her—not so much for her “achievement,” as for her ability to shock and arouse pious rage. TV anchor Mubasher Lucman especially capitalized on this, raking in ratings after forcing her to appear on an episode with randy cleric Mufti Muhammad Qavi, a member of the country’s much-revered moon-sighting committee. What happened next sets up the contrast in state behavior between sexes. Mufti Qavi openly offended by mixing piety with lust in public. Yet, today, he continues to live cherished by his followers while Qandeel’s body lies buried for refusing to allow him to take advantage of her.

It is clear from watching Lucman’s show that he thought he could get Qavi to denounce the rebel model and notch up viewership, just as he had done unsuccessfully with actress Veena Malik after Pakistanis hauled her over the coals for going to “enemy” India to act in the Bigg Boss TV show alongside Indian celebrities and posing scantily clad for a magazine published in the neighboring nation. Instead, Lucman found the cleric going soft on her.

Qandeel snubbed Qavi on the Lucman show but the man continued to pester her through phone calls, offering her “better sex” after marriage than what he presumed she was currently getting. Falling for the viewership lure, she made another video of herself sitting on his lap and wearing his ‘Jinnah cap.’ The resulting backlash was as tragic as it was predictable with the “nation” shocked and the “state” firing Qavi from the moon-sighting committee and Imran Khan, chief of the Pakistan Tehreek-e-Insaf, relieving him of membership of the party.

Qandeel’s social media following grew with each controversy. At the time of her death, 3,000 people followed her on Twitter and over 800,000 on Facebook. Many of her fans compared her to reality TV maven Kim Kardashian. With Qandeel’s name now on every Pakistani’s lips, one of her Gulf-based brothers called up self-confessed murderer Waseem, who was still living with their parents, and urged him to get rid of her for “dishonoring” the family. Another brother, a subedar in the Pakistan Army, had hinted likewise in the face of a legal notice sent by a “respectable” Baloch citizen of Multan, who had claimed Qandeel had insulted his tribe by calling herself “Baloch.” Honor, it seemed, was endangering her rebellious life much as it has so many women across Pakistan. For Qandeel, it seemed to be business as usual. Having learned to survive assaults by hostile women, giving back as good as she got, she did not stop her modeling or her provocative videos. After all, she wasn’t earning just for herself, but for her entire family too.

Qandeel’s humane nature was obvious in the Rs. 10,000 she sent to her mother every month, in contrast to her brothers who never spared a single penny for their parents. She also helped her sisters, buying them expensive gifts with the money she earned from showbiz. One of the brothers who wanted her killed even had the gall to ask for a “gift” of Rs. 100,000. He was given it without complaint.

When Waseem strangled her to death in July 2016, her parents didn’t stand with him. Both praised her humanity and caring nature and refused to accept that she had violated their honor. That year the Human Rights Commission of Pakistan announced that there were 326 honor killings across the country, of which 312 were women: the most common motive appeared to be retribution or punishment for illicit relations and ignoble marriage choice. It declared: “Of the 326 murders, 67 were committed by a husband or ex-partner; 64 by siblings; 41 by parents; 30 by other relatives; 15 by in-laws; and 10 by the deceased’s son or daughter.”

Sharmeen Obaid-Chinoy, the activist who won an Academy Award for a documentary on honor killings, was among the first to voice her outrage, tweeting: “How many women have to die before we pass the Anti Honor-Killing Bill?” The legislation, passed into law after public protests over Qandeel’s killing, has yielded mixed results, as it leaves to judges the discretion to determine whether a murder was motivated by honor. Qandeel proved no woman needs a man to thrive. For a majority of honor killing victims, Pakistan’s male-dominated judiciary sadly ensures they cannot get justice without a man making the choice for them.