Hundreds of Protesters Clash With Police in India-Occupied Kashmir 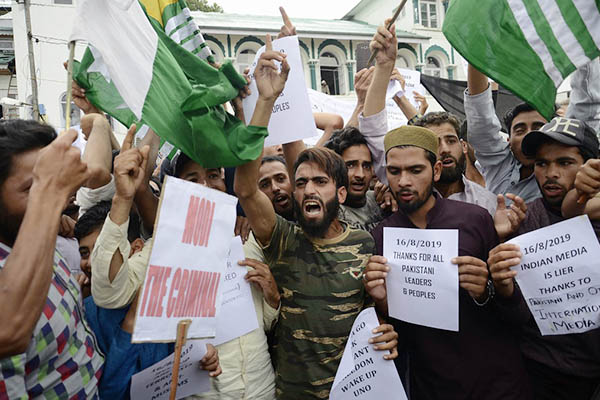 Protesters in Srinagar rally against the Indian government’s move to strip Jammu and Kashmir of its autonomy on Aug. 16, 2019. AFP

Hundreds of protesters in India-Occupied Kashmir clashed with police on Friday who responded with tear gas rounds and pellet-firing shotguns, an AFP reporter at the scene said.

The clashes broke out after several thousand people rallied in the main city of Srinagar, where a security lockdown entered its 12th straight day after New Delhi stripped Kashmir of its autonomy. No injuries were reported.

The protesters rallied inside the Srinagar locality of Soura that has witnessed regular protests since New Delhi announced its surprise move on Aug. 5. Police attempted to disperse hundreds of protesters who tried to march down the main road. Protesters hurled stones and used shop hoardings and tin sheets as improvised shields, as police shot dozens of rounds into the crowd.

A drone kept vigil over the area as thousands of men and women gathered inside a popular shrine. “We are trying to breach the siege and march to the city center but police is using force to stop us,” one protester told AFP, adding that three people were injured on Thursday in clashes with police officers and reservists.

Sporadic clashes were also reported in other parts of the Kashmir Valley, the main hotbed of resistance to Indian rule for decades, where communications have been cut off for nearly two weeks. Major towns and cities in the restive valley remained under curfew, with government forces allowing people to move only on special passes.

Government forces erected steep barricades and used concertina wires to block roads. No big gatherings were allowed in the valley and most mosques were shut for the second consecutive Friday. “We want what is ours. We are not begging for anything but demand India should respect its promises,” another protester told AFP. “We will not sit back until we achieve complete independence from India,” he said.

The protesters marched inside the lanes, carrying black ﬂags—signifying grief—and placards with slogans including “Go India, go back.”