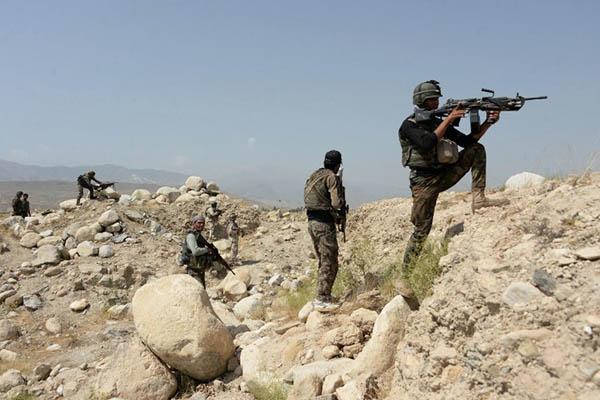 In defiance of U.S. pressure, militant group has seized territory from Taliban

Islamic State fighters have captured Tora Bora, a mountain cave complex in eastern Afghanistan that was once the hideout of Osama bin Laden, officials said on Thursday, despite pressure on the jihadists from U.S.-led forces.

The militants seized the territory from the Taliban this week, in a strategic and symbolic victory just two months after the U.S. military dropped its largest non-nuclear bomb ever used on a nearby I.S. stronghold. The fall of Tora Bora after days of heavy fighting, which forced hundreds of residents to flee, marks a setback to the U.S. military which has vowed to defeat I.S.’s local affiliate this year as they make inroads into Afghanistan.

“Tora Bora has fallen into the hands of I.S. fighters,” government spokesman Attaullah Khogyani told AFP. “Afghan troops last night launched an operation to take it back from I.S.”

Tora Bora in eastern Nangarhar province was the site of a major U.S. military offensive in late 2001, when Al Qaeda chief bin Laden was believed to be hiding there. He later crossed into neighboring Pakistan, where he was killed in a U.S. raid in 2011. Government forces and the NATO coalition had lately engaged in little fighting against Taliban insurgents who dominated Tora Bora, supported by local tribes along the mountainous border with Pakistan.

Local tribesmen confirmed to AFP that the Taliban had retreated from large parts of Tora Bora. “When Daesh fighters launched their operation to seize Tora Bora, the Taliban fled and left us alone to protect our women and children,” said Juma Khan, a tribesman who escaped with hundreds of other residents.

First emerging in 2015, I.S.’s local affiliate has made steady inroads into Afghanistan, overrunning large parts of Nangarhar and Kunar provinces and challenging the bigger Taliban militant movement on their own turf. The fresh I.S. assault and capture of Tora Bora comes despite a heavy U.S.-backed Afghan offensive against the militants.

General John Nicholson, the top U.S. commander in Afghanistan, has pledged to defeat the local I.S. affiliate this year. The deployment in April of the U.S. military’s so-called Mother Of All Bombs on another tunnel-and-cave complex in nearby Achin district killed dozens of jihadists, but fighting in the area has continued unabated. The fall of the Tora Bora has also prompted heated discussion in the Afghan parliament, with lawmakers warning the government of growing I.S. activity in eastern Afghanistan.

“Is this government unaware of the problem? Is this government here to kill us?” asked Hazrat Ali, a lawmaker from Nangarhar. Ali was joined by other M.P.s who suggested the I.S. offensive on Tora Bora had been prompted by the American decision to deploy the MOAB.