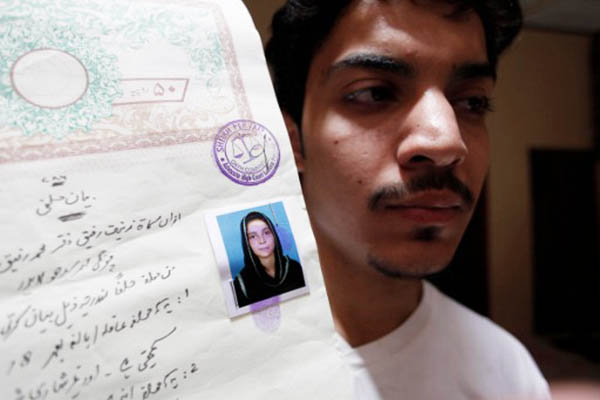 Husband of teenager murdered for ‘honor’ says he will not rest until Zeenat’s family has been convicted of her killing.

The husband of a 16-year-old girl who was murdered by her family for marrying him vowed Thursday to do whatever it took to get justice for his young wife.

Zeenat Bibi was set on fire Wednesday in Lahore, a little over a week after she wed 20-year-old motorcycle mechanic Hasan Khan against the wishes of her family. Her mother Perveen Bibi has admitted to the killing, though details of the brutal murder remain unclear. Early reports suggested she had been burnt alive though police now say she may have been asphyxiated first, with a postmortem report not expected until later this month.

Bibi’s charred remains were buried by her new husband’s family before dawn after none of her relatives sought to claim her body.

Speaking to AFP on Thursday, a visibly distraught Khan said: “I am determined to continue the legal proceedings against the family. I am after them, and my family is supporting me. It is my destiny now to bring her justice—if the accused are condemned it will bring calm and peace to my soul.”

Khan, who said he had met his wife while they were students at high school, also suggested that Perveen had been helped in the murder by her brother and son, and was covering up for them.

The case has drawn widespread outrage even in a country used to so-called “honor killings,” which account for hundreds of deaths every year. It was also the third such case involving burning over a three-month span.

Pakistan amended its criminal code in 2005 to prevent men who kill female relatives escaping punishment by pardoning themselves as an “heir” of the victim. But it is left to a judge’s discretion to decide whether to impose a prison sentence when other relatives of the victim forgive the killer—a loophole that critics say is still exploited.

Leading opposition senator Sherry Rehman, who is also a prominent women’s rights activist, called on the government on Thursday to pass a long-awaited bill aimed at amending the law. “What is the reason for the delay? Three girls have been burnt to death—this is a scary new trend. It’s not as though we didn’t have thousands being killed before. It’s not as though the law will put an end to it but the state must put its full force into addressing the issue,” she said.

Rehman added that Prime Minister Nawaz Sharif had promised to push through legal reform after a documentary highlighting the issue won an Oscar in February, but had failed to act. “I think they are pandering to the religious parties,” she said, referring to Islamist opposition parties who wield considerable influence beyond their representation in Parliament, where they hold around five percent of seats.

Those who would kill in the name of honor “have increasing impunity—they can see that despite public anger it’s the hallowed halls of power are turning a blind eye,” she added.