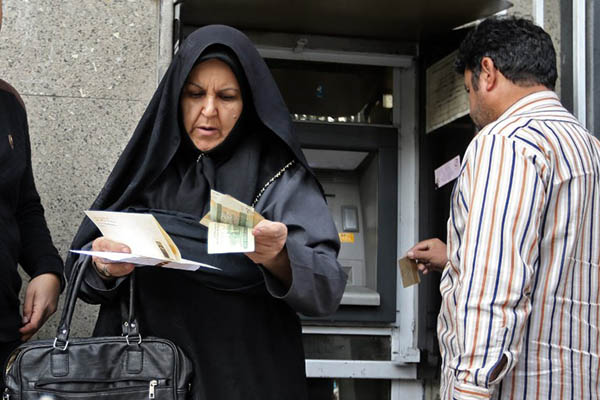 Seventy-year-old Heidar Fekri has been selling industrial equipment from his small store in a Tehran bazaar since before the revolution, but for the first time he is not sure he can survive. He means it literally: “My shelves are empty, my warehouses are empty and soon I will have to close the doors. This has been my entire life—I won’t survive long after the doors close.”

Iran’s economy had plenty of problems even before U.S. President Donald Trump decided in May to abandon the 2015 nuclear deal and re-impose “crippling” sanctions. But that move exacerbated a record drop in Iran’s currency, down 70 percent in the past year, and prompted an exodus of foreign firms.

Anticipation of the return of the oil embargo—due to kick in on Monday—has already plunged the country into recession and will see the economy shrink by 3.6 percent next year, says the International Monetary Fund.

For Fekri, who has been bringing in industrial pumps and drills from Europe for 47 years, the uncertainty means he has not imported anything for more than a year. “Sales have dropped 90 percent compared with six months ago. The whole bazaar is suffering,” he said.

Almost all products in Iran—from medicines to aircraft spares to plastic bottles—are tied into the global supply chain, so the currency collapse and renewed isolation threatens every corner of society. The government has been forced to provide food baskets to around half Iran’s households as inflation soars.

For the middle class, perhaps the biggest blow is psychological, as the burst of hope that accompanied the nuclear deal in 2015—the promise of the country finally shedding its pariah status—has evaporated. “No one knows what the Americans actually want. We did everything they wanted and it wasn’t enough. It feels like bullying,” said Sam Cordier, head of PGt Advertising, which represents foreign clients such as British Airways and Nestle in Tehran.

Washington says the sanctions are designed to curtail Iran’s “destabilizing” activity in the Middle East, but many see them as an attempt to trigger a revolution. “It’s not fair for the Americans to incite violence. If this continues, all the professional businessmen with something to share through knowledge and investment will leave,” said Cordier.

He was forced to sack six of his 30 staff and reduce salaries for the rest as, one by one, his foreign clients packed their bags. “I was crying every 10 minutes when I told them. These are the people who are being hurt. Many young, educated people are leaving the country. There’s a massive brain-drain,” he said.

There is plenty of hatred towards the Trump administration, but a surprising number of Iranians pin the blame on their own government for not better protecting them. “Yes, America is doing bad things but they are looking out for their interests. If our state had looked out for Iran’s interests, we wouldn’t have the situation we have now,” said Erfan Yusufi, 30, whose hip new coffee shop is struggling to cope with rising prices and falling demand.

Iran’s leaders face a tricky balancing act, remaining defiant in the face of U.S. pressure, while acknowledging the economic pain felt in the country.

“All of us understand people are suffering and under pressure,” President Hassan Rouhani told parliament last weekend. “We cannot tell our people that because of America’s pressure, we cannot do anything. This answer is not acceptable.” He blamed foreign media for “filling people’s minds with false propaganda” about soaring prices, though Iran’s own central bank says food prices rose 46.5 percent in the year to September.

For all the problems, there is little sign that Iranians want another revolution, not least because a sizeable number are still fiercely supportive of the last one. Most others are fearful of violent unrest, cowed by the security forces or uninterested in doing the bidding of a foreign power.

There is instead a sad resignation among many young people, who often refer to themselves as the “burned generation” for having been denied the chance to realize their potential. “I’m worried about the future,” said Yusufi in his coffee shop. “Our generation starts each day not knowing what will become of us.”