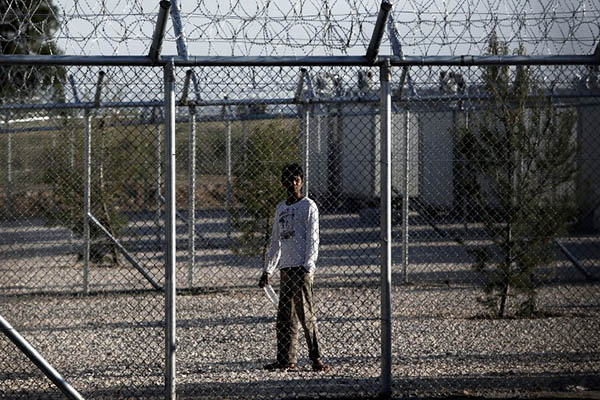 Migrants are protesting death of a Pakistani inmate and inhumane conditions at detention centers.

Hundreds of illegal immigrants being held at a Greek detention center launched a hunger strike on Monday to protest the death of a Pakistani inmate and conditions at the overcrowded camp.

The strike at the center in Amygdaleza comes after the death of Mohamed Asfak on Nov. 6, who had been held there after making his way to Europe from his native Pakistan. Asfak had suffered serious respiratory problems for months, though he was only hospitalized as his condition became life threatening, according to Greek anti-racism group Keerfa.

A humanitarian group that works in the camp confirmed Asfak’s death to AFP, though there was no word from officials on how he died.

According to Keerfa, police beat Asfak during a protest at another Greek detention center in Corinth several months ago and he repeatedly asked for treatment for his injuries, but didn’t receive help until recently.

Migrants groups have repeatedly criticized the overcrowded conditions and lack of infrastructure at the camp in Amygdaleza, which was to hold 1,000 immigrants, but is home to double that number.

Greece is one of the key ports of entry into Europe for many thousands of migrants every year. It has frequently been criticized for poor conditions in its detention centers. Given the wave of immigrants from war-torn countries like Syria and Afghanistan in recent years, Athens has demanded more money from the European Union to handle the influx.

Greece has also called for a revision of the “Dublin Regulation,” which makes the first EU country crossed by immigrants responsible for his or her future asylum applications.