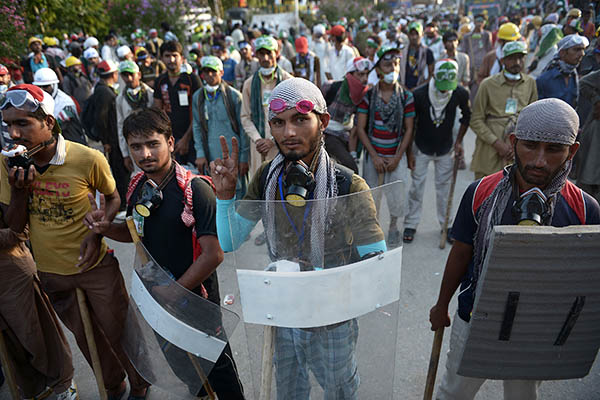 The Pakistan Army on Tuesday sent troops to boost security in Islamabad’s ‘Red Zone,’ as cricketer-turned-politician Imran Khan and populist cleric Tahir-ul-Qadri led protesters to Parliament in a high-stakes bid to depose the prime minister.

Khan, who leads the Pakistan Tehreek-e-Insaf (PTI) party, and preacher Qadri say last year’s general elections were rigged and have demanded Prime Minister Nawaz Sharif resign. Thousands of their followers have rallied in Islamabad over the past five days to demand Sharif quit, piling pressure on the government little more than a year since its landslide victory.

The government has used shipping containers to seal off Islamabad’s ‘Red Zone,’ which houses key buildings including Parliament, the Prime Minister’s House and numerous Western embassies.

Khan and Qadri defied government warnings not to try to enter the area, both pledging to march peacefully to stage sit-in protests outside Parliament. “We will protest in front of the Parliament, we will not enter inside but will stage such a big crowd that people will forget Tahrir Square,” Khan told cheering followers.

PTI activists used a crane to remove the containers blocking their path and live TV footage showed them on the move. But there were multiple containers on the road, preventing the protesters from securing easy access.

Interior Minister Chaudhry Nisar Ali Khan earlier said extra troops were being deployed to protect key buildings. “It has been decided to hand over the security of the red zone to military,” the minister told reporters.

The decision was taken at a meeting chaired by Sharif and attended by Army chief Gen. Raheel Sharif, Khan said—suggesting the government has the support of the powerful military in the crisis. An extra 350 troops were deployed in the red zone to add to the 350 stationed there since June, military sources said.

Pakistan has experienced three military coups and the protests triggered speculation about possible intervention by the armed forces. Sharif’s Pakistan Muslim League (Nawaz) party has accused Khan of trying to derail the nation’s perennially fragile democratic system as the government struggles with Taliban militancy and a flagging economy. Mass support for the protest movement beyond Khan and Qadri’s core supporters appears to be lacking and other opposition parties have shunned Khan’s call to unseat the government.

Newspapers and business leaders have also criticized Khan’s tactics, which on Sunday included a call for “civil disobedience.” With Khan looking isolated, on Monday PTI made a dramatic double roll of the dice to try to re-energize its campaign.

First the party announced it would resign all 34 of its seats in the 342-member Parliament and three out of four provincial assemblies. Then Khan pledged to lead the protesters in a march on the ‘Red Zone,’ setting the stage for possible clashes.

The interior minister renewed the government’s offer of talks with Khan and Qadri to resolve the protests, and accused the PTI chief of reneging on a promise not to try to enter the ‘Red Zone.’ Khan confirmed in a TV interview that he had promised to stay out of the ‘Red Zone,’ but claimed his supporters’ passion had compelled him to enter the restricted area.

“I again invite them to negotiations. No problem could be solved through violence, rather violence complicates it,” he said. Planning and development minister Ahsan Iqbal on Tuesday said the protesters had no mandate and urged them to talk. “The whole political leadership is united for this. All opposition parties are trying to engage them and find out a political solution,” Iqbal told reporters. “You have a few thousand crazy guys but 180 million people who have elected this government are guarantors of this government.”

Last week Sharif tried to head off the protests by setting up a judicial commission to investigate rigging allegations, but Khan dismissed the proposal immediately. The government has also set up a parliamentary committee to look at electoral reform. On Tuesday, a PMLN spokesman said that P.M. Sharif would not resign and the matter was not up for negotiation.

At a joint press conference of all opposition parties except PTI, Khursheed Shah, a senior figure in the Pakistan Peoples Party (PPP) urged Khan to come to the negotiating table.

The general elections of May 2013, which swept the PMLN to power, and brought PTI its best-ever result, was rated as free and credible by international observers but both Khan and Qadri insist it was fixed. The European Union issued a statement voicing its support for democracy in Pakistan—and linking it to a highly prized trade deal.

Enhanced trade privileges extended to Islamabad are “the ultimate reflection of the EU’s strong commitment to the economic prosperity of a democratic Pakistan,” the statement said.