Imran Khan Says He Will Meet Taliban in Peace Push 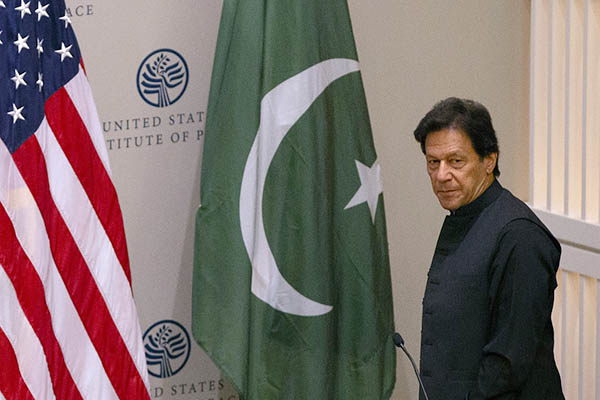 Prime Minister Imran Khan on Tuesday said he would meet with the Taliban after returning to Pakistan, as part of efforts to end 18 years of war in Afghanistan.

Khan spoke in Washington on his first official trip to the United States, where President Donald Trump hosted him at the White House a day earlier. He said he had also spoken with Afghan President Ashraf Ghani, and now, when he goes back, “I will meet the Taliban and I will try my best to get them to talk to the Afghan government.”

Speaking at the U.S. Institute for Peace, a bipartisan federal body, Khan said he had been contacted by the extremist Afghan Taliban “a few months back,” after his election win in July 2018, but did not take a meeting at that time because Kabul was not in favor of it. The militants reached out to him “because I always maintained there was no military solution” to the war in Afghanistan, he said. “So because of that, I had a certain amount of credibility amongst them,” added Khan.

Khan earlier Tuesday met with U.S. Secretary of State Mike Pompeo, who emphasized the importance of working together and “Pakistan’s significant role in supporting the Afghan peace process and counterterrorism,” according to a U.S. statement.

The U.S. peace envoy to Afghanistan, Zalmay Khalilzad, left for Kabul on Monday for the latest round of talks. From there he is to head to Doha, Qatar. Khalilzad has had several meetings with the Taliban in the past year, the most recent being on July 9 in Doha. But the major hurdle has so far been the Taliban’s refusal to negotiate directly with the Afghan government.

“It’s not going to be easy because there’s no centralized command, it’s a devolved movement,” Khan cautioned about the insurgent group. “But we feel that if we all work together, we feel this is the best chance of there to be peace in Afghanistan.”

Khan also stressed that Afghanistan’s presidential election in September “must be an inclusive election where the Taliban also participate.”

A breakthrough could pave the way for a withdrawal of international troops about 18 years after the 9/11 attacks on the United States, which led the U.S. to launch an offensive that dislodged the Taliban government from Kabul.

Pakistan was the Taliban’s main sponsor when it seized power in Afghanistan during the 1990s, and its ongoing influence over the group is seen as key to facilitating a political settlement. This influence has also opened Pakistan up to accusations that it is fueling the fighting in Afghanistan through the use of militant proxies such as the Taliban-allied Haqqani Network.

Khan made an unusual on-the-record admission that Pakistan had in the past pursued this policy, which it calls “strategic depth,” because it feared encirclement with a government in Kabul that had fallen under Indian influence. But he insisted that was no longer the policy.

“Today, there is no concept in Pakistan of ‘strategic depth’ because we feel that by interfering in Afghanistan… we have actually done a lot of damage to our own country,” he said.