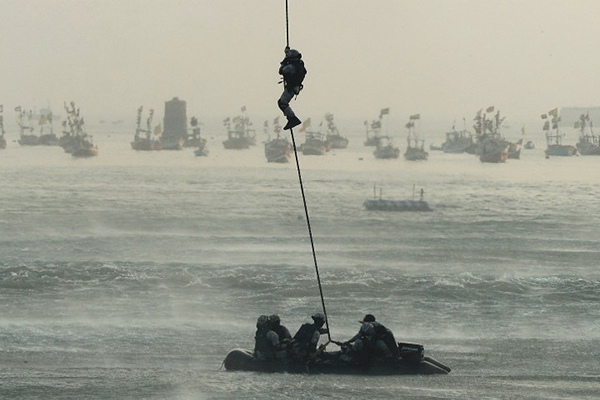 Nearly 200 reported dead in the disaster over the past four weeks.

India on Wednesday deployed troops to Tamil Nadu and closed the main airport there after heavy rains followed weeks of flooding that has killed nearly 200 people in the southern coastal state.

Thousands of rescuers carrying diving equipment, inflatable boats and medical equipment were battling to evacuate victims across the flooded state, officials said. Thousands of passengers left stranded at the flood-hit international airport in the state capital Chennai were also being evacuated, the Press Trust of India news agency said.

“At least 10,000 police personnel and trained swimmers are being deployed to help with the rescue effort,” Chennai police chief J.K. Tripathy told AFP. He said 186 people had been reported killed in the floods, now in their fourth week.

India drafted in the army and navy to help with the rescue effort on Wednesday after torrential overnight rain. “Rescue and relief operations in progress in areas of Chennai. 3 Army columns involved,” the defense ministry tweeted.

Factories and schools closed and phone networks were patchy, while parts of the city of 4.3 million were without power, as weather officials warned of more heavy rain in coming days. “The situation is a little grim. Some urban areas are totally flooded,” said S.P. Selvan, deputy inspector general of the National Disaster Response Force.

One local lawmaker urged Prime Minister Narendra Modi’s government to declare a national disaster so that more rescuers and relief would flow to the state. “It’s such a bad situation. We need much more because the situation is so grave and the help that has come is not enough. People are marooned all over,” Tamil Nadu lawmaker Kanimozhi told the national parliament.

Television footage showed flood-hit residents wading through waist-deep water, many carrying belongings on their heads or in small boats. Authorities said the airport would remain shut until at least Thursday, hampering efforts to bring in relief supplies.

The head of the Indian Meteorological Department, L.S. Rathore, said the heavy rain was expected to continue “for at least the next 72 hours” and rainfall was already 50 percent above normal for the year.

Rivers and lakes in the region “have become saturated and don’t have the capacity to take in any more water,” he added.

Modi cited the floods as a consequence of climate change in his weekly radio address on Sunday, a day before meeting other world leaders at a global climate summit in Paris. The Indian P.M. has repeatedly called on developed countries to do more to combat the impact of global warming on the world’s poor, who experts say will be disproportionately affected.

Factories closed in Chennai, a major auto-manufacturing hub that includes Ford and Nissan. Many of the I.T. outsourcing centers located in the state also shut. Bus and rail services were also hit, with many commuter trains into Chennai cancelled. Railway bridges in some areas had been washed away.

Local media said schools in the state capital had been closed and exams postponed. Long queues formed at the few local ATMs still working in Chennai as residents withdrew money to stock up on supplies.