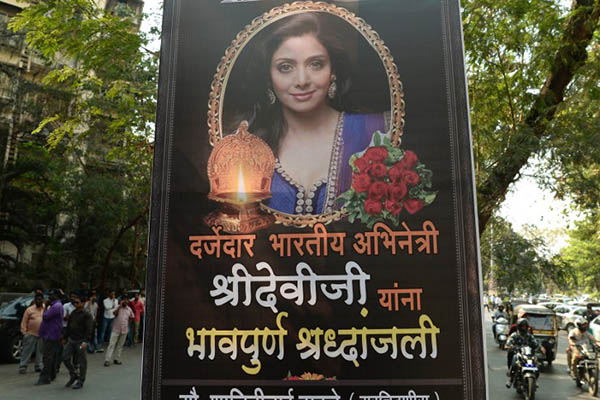 India on Monday mourned Bollywood superstar Sridevi Kapoor after her death in Dubai aged just 54, as police in the emirate said she drowned in her hotel bathtub.

The body of Sridevi, one of the biggest names in Hindi cinema, had been due to be brought back to Mumbai on Monday by charter flight. It was not immediately clear however when Dubai authorities would release it.

Hundreds of heartbroken fans gathered outside her Mumbai home hoping to catch a final glimpse of the star before her cremation, now likely to take place on Tuesday at the earliest. Initial reports had cited a heart attack as the cause of her death late Saturday at a hotel in the emirate, where she had been attending a nephew’s wedding.

“The death of Indian actress Sridevi occurred due to drowning in her hotel apartment’s bathtub following loss of consciousness,” Dubai police tweeted, citing an autopsy report.

Police have now referred the case to the public prosecutor.

Tributes kept pouring in for the actress and fans gathered outside her home for a second day. “We want to see her one last time,” 48-year-old Laxmi Subbaramaiah told AFP outside the house in the Andheri area of Mumbai—the heartland of the Bollywood film industry. “All of my family members are big fans and we cried when we heard the news. We will wait here until her body comes back,” he said.

Vishal More, 23, said he had traveled seven hours from Jalgaon district, around 400 kilometers away from Mumbai, to bid farewell to his favorite actress. “I’ve been waiting all morning to catch a last glimpse of Sridevi. I have watched all of her movies. She is such an inspiration,” he said.

Sridevi’s death has prompted an outpouring of grief in India from fans and fellow actors as well as condolences from Prime Minister Narendra Modi.

“I have always been a huge fan of her work. Equally I have been an admirer of the grace and dignity with which she conducted herself,” actor Aamir Khan wrote on Twitter. “I join all the millions of her fans in mourning her demise. Ma’am we will always remember you with love and respect,” he added.

Fellow actor Ranveer Singh tweeted that he was “shocked and saddened to hear about the untimely demise of one of Hindi cinema’s greatest superstars.” Actress Alia Bhatt posted on Twitter: “Nothing makes sense. I have no words… just completely shocked. RIP Sri Devi. My icon forever. Love you.”

Sridevi, born Shree Amma Yanger Ayappan in the southern state of Tamil Nadu, appeared in around 300 films and was awarded the Padma Shri, India’s fourth highest civilian award, for services to the movie industry. She made her acting debut at the age of four and her career spanned more than four decades.

Sridevi worked in India’s regional Tamil, Telugu and Malayalam-language films before making her Bollywood debut in 1979. She became a national icon with a string of blockbuster films including Chandni, Mr. India, Mawali and Tohfa.

Sridevi famously took a 15-year-break from the silver screen after marrying film producer Boney Kapoor but returned in the 2012 hit comedy-drama English Vinglish. Her most recent film was last year’s Mom.

She was set to see Jhanvi, the eldest of her two daughters, make her Bollywood debut.