India Urges Pakistan to Act After Air Force Base Attack 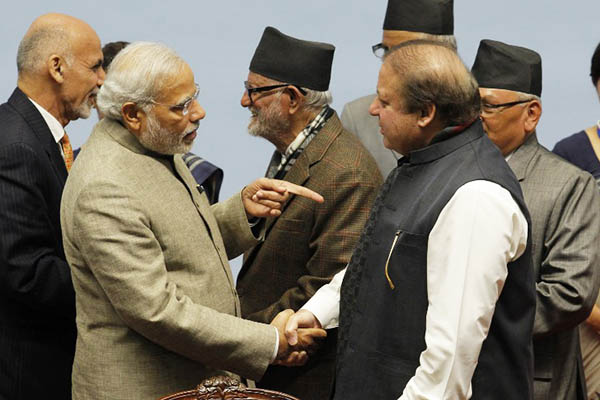 P.M. Sharif assures ‘decisive’ action against individuals and groups involved in the assault.

Indian Prime Minister Narendra Modi urged his Pakistani counterpart on Tuesday to take “firm and immediate action” against those behind an attack on an Indian air force base that left seven soldiers dead.

Modi’s office said New Delhi had given Islamabad “specific and actionable information” on the audacious attack, which came just days after a landmark visit to Pakistan by the Indian premier raised hopes of improved relations.

Security officials suspect the gunmen belonged to the Pakistan-based Jaish-e-Mohammed, the group that staged a 2001 attack on the Indian parliament which brought the two countries to the brink of war. The attack was claimed by the United Jihad Council, an umbrella grouping of Kashmiri jihadist organizations seeking the right to self-determination. Jaish-e-Mohammed is not part of the United Jihad Council.

In a statement, Modi’s office said Prime Minister Nawaz Sharif had telephoned him to discuss the attack on the Pathankot base in the northern state of Punjab near the border with Pakistan. Modi “strongly emphasized the need for Pakistan to take firm and immediate action against the organizations and individuals responsible for and linked to the Pathankot terrorist attack,” said the statement. “Specific and actionable information in this regard has been provided to Pakistan.”

It said Sharif had given assurances that his government would take “prompt and decisive action.”

Pakistan had already condemned the attack, which began on Saturday with a dawn raid on the vast air base that triggered a 14-hour gunbattle. A statement Tuesday from Sharif’s office said his government was “working on the leads and information provided by the Indian government.”

Sharif also expressed his condolences for the loss of life and said he appreciated the “maturity” shown by the Indian government in the wake of the attack.

Some analysts have suggested the rare targeting of an Indian military installation outside disputed Kashmir may have been aimed at derailing talks between the neighbors, who have fought three wars since gaining independence from Britain in 1947. It coincided with a 25-hour siege near an Indian consulate in Afghanistan that left at least one policeman dead and 11 others wounded.

Analysts in Pakistan believe it is nearly impossible that the prime minister would have been allowed to hold a breakthrough meeting with his Indian counterpart last month without the consent of the Army, widely understood to dictate foreign and security policy.

But analyst Khadim Hussain said the attack on the air base along with a Taliban surge in Afghanistan indicated that elements of the Pakistani military were not on board with the negotiations. “The immediate result is they would like to derail the peace process,” he told AFP, clarifying that it was unclear whether such decisions were sanctioned at the highest levels.

Sharif’s statement Tuesday noted that whenever a “serious effort” for peace between the India and Pakistan was launched, “terrorists try to derail the process.”

Modi’s comments came as India’s defense minister said the Pathankot attack had exposed “some gaps” in security following media criticism of how the incident was handled.

Gunshots could still be heard from the base on Monday—more than 48 hours after the raid—leading some to question why it took so long to neutralize the six assailants, all of whom were finally killed.

“I do see some gaps [in security], which will be clear after investigations,” minister Manohar Parrikar told journalists. He stressed that the base was a “complicated area” spread over nearly 2,000 hectares and housing 3,000 families.