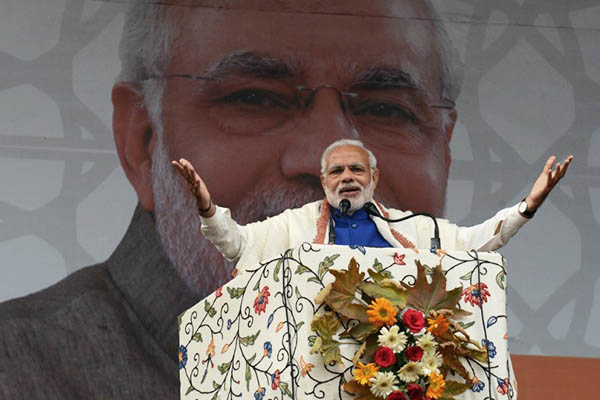 Narendra Modi says he wants to restore the Muslim-majority state to its ‘former glory.’

Speaking in the main city of Srinagar amid intense security, the Hindu nationalist leader said he wished to take India’s only Muslim-majority state back to its “former glory.”

Modi stressed the need to create jobs for young people, boost tourism and infrastructure, and close a gaping digital divide in the conflict-wracked region, where many do not have access to the Internet. “To fulfill these dreams, the Indian government is announcing an 80,000 crore rupee [$12.1 billion] package to Jammu and Kashmir,” Modi told a cheering crowd at a public rally in Srinagar, as authorities imposed a curfew for the second day running. “My heart wants this money to be spent to change your fortunes, to give strength to your youth, to build a modern Kashmir,” he said as some in the audience jumped up and down, waving their arms with joy. “Not only are Delhi’s funds yours, but so is its heart.”

Srinagar was hardest hit after the rain-swollen River Jehlum burst its banks in September 2014 leaving thousands stranded. The flood killed 300 people and caused an estimated $16 billion worth of damage, with thousands of homes and large tracts of farmland ruined, according to official data.

Modi steered clear of politics in his speech in the disputed region, prompting opposition leader Omar Abdullah to react sharply. “PM Modi has made the same mistake of weighing the Kashmir issue in Rupees & Paise!!!!,” Abdullah, the former chief minister of the state tweeted.

Kashmir has been divided between India and Pakistan since the end of British colonial rule and is claimed by both in its entirety. Security was beefed up ahead of Modi’s visit, with the region already tense following incidents of religious intolerance and attacks on minorities in many parts of India.

In the run up to the prime minister’s appearance, police cracked down on separatist activists who had called for a counter-rally near the venue, arresting more than 300 of them and confining top leaders to their homes.

Top separatist leader Syed Ali Geelani, who tried to lead a protest march against Modi’s rally in Srinagar, said economic packages have not resolved the dispute over Kashmir in the past. “Modi’s visit and the economic package will not change anything, like in the past,” he told reporters outside his residence where a large group of police prevented him from leaving his home.

A separatist insurgency against Indian rule and India’s counter-insurgency campaign has left tens of thousands dead since 1989, mostly civilians.