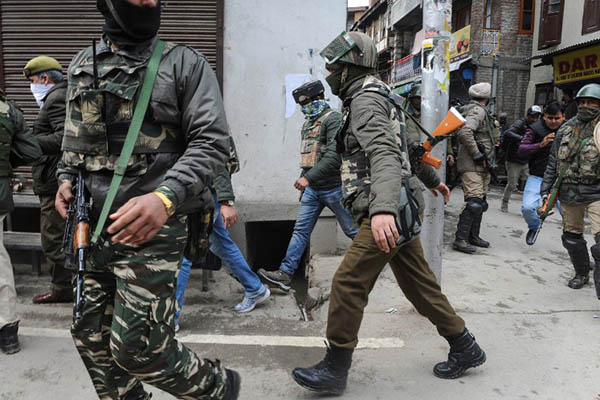 Indian authorities have detained hundreds of separatist leaders and Muslim activists in an escalating crackdown in India-Occupied Kashmir with the region remaining on high alert following a suicide bomb attack.

Police said about 400 arrests had been made over the weekend in late-night raids aimed at weakening support for groups resisting Indian rule in the Himalayan territory also claimed in full by Pakistan.

The sweeps follow the Feb. 14 attack on an Indian convoy in Pulwama district, which killed 40 soldiers and was claimed by Pakistan-based Islamist group Jaish-e-Mohammed (JeM) but staged by a local. The attack has pushed India and Pakistan into a fresh round of saber-rattling as thousands of extra paramilitary troops are deployed to Kashmir.

A senior police official, who requested anonymity to speak with the media, said most of those swept up in the raids were linked to “fundamentalist religious groups.”

“We don’t want militants to operate with high morale after the Pulwama attack. We are hitting at their support base with urgency,” the officer said. “We want to starve the terrorists of their support network and finish them off like fish without water.”

Separatist groups whose leaders were rounded up called for a general strike on Sunday across Kashmir over what they called a “reign of repression.”

India has accused Pakistan of supporting the attack—a claim rejected by the Islamabad government—and there have been widespread calls for Prime Minister Narendra Modi to order a reprisal strike. Modi has promised a “jaw-breaking response,” spiking tensions in Kashmir where many fear a military strike against Pakistan is possible.

At least 1,000 paramilitary troopers were rushed to the region and more were on the way, with concerns for security ahead of India’s general election due by May, a statement issued by the governor’s office said Sunday.

Helicopters and fighter jets flew low over the Kashmir Valley late Saturday, sparking panic as residents rushed to shops to buy fuel and other essentials. The government has issued urgent appeals to quell the panic in the region, where hundreds of paramilitary troops are patrolling the streets and manning additional roadblocks.

Kashmir has been divided between India and Pakistan since they gained independence in 1947, and the nuclear-armed neighbors have fought two wars over the Himalayan territory. Several militant groups have been fighting Indian forces for decades in the territory New Delhi controls.

Tens of thousands of people, mostly civilians, have been killed in 30 years of fighting in the restive region. Police said on Sunday that at least one suspected rebel and an Indian police officer were killed during a gun battle in the Kashmir Valley.