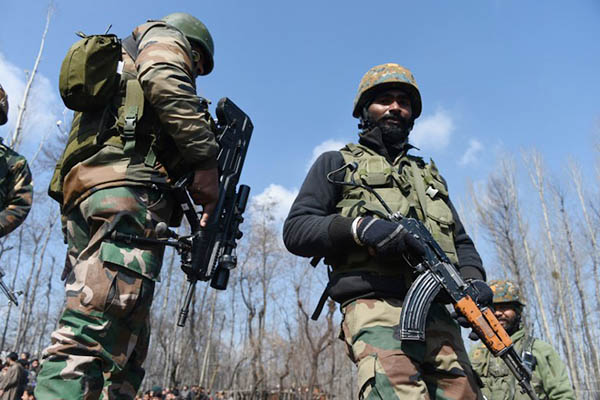 Paramilitary trooper opened fire on fellow soldiers before shooting himself

A paramilitary trooper in India-Occupied Kashmir shot dead three of his comrades early on Thursday, officials said, as fresh violence raged in the restive territory where 40 troops died in a bombing last month.

Separately an Indian soldier was killed in the latest exchange of fire with Pakistani forces across the de-facto Line of Control (LoC) border since the two nations launched tit-for-tat airstrikes last month.

Police said the Central Reserve Police Force (CRPF) trooper opened fire on his colleagues with his service rifle at a camp in Udhampur, some 200 kilometers south of the main city Srinagar. “He shot himself too and is in a critical condition at a hospital,” Jammu police official MK Sinha told AFP, saying the man “may have been under the influence of drugs.”

According to rights group Jammu Kashmir Coalition of Civil Society (JKCCS), 20 Indian armed forces personnel killed themselves in 2018, the most in a decade. Since 2004 there have been 80 incidents of “fratricide” and 323 suicides, it says.

Experts say that the factors include stress, long duty hours, denial of leave and domestic issues, prompting authorities to initiate de-stressing initiatives for soldiers such as yoga.

Separately on Thursday morning, a soldier was killed when India and Pakistan again exchanged fire across the LoC near the southern area of Sundarbani, army spokesman Lieutenant Colonel Devender Anand told AFP.

Kashmir has been divided between India and Pakistan since the end of British colonial rule in 1947. Both claim it in full and have fought two wars over the territory. India accuses Pakistan of backing rebels fighting for independence of all of Kashmir, while some want the entire territory to be part of Pakistan. Islamabad denies this and maintains it only offers diplomatic support to an indigenous Kashmiri movement. India has some 500,000 troops in its part.

On Feb. 14 a suicide bombing perpetrated by a local separatist but claimed by a militant group based in Pakistan killed 40 CRPF troopers. India and Pakistan then carried out tit-for-tat airstrikes, alarming the international community.

Tensions have since eased but cross-LoC fire has continued, as have gun battles between suspected militants and Indian security forces.

Two such clashes raged separately in the northern Kashmir valley on Thursday. Two police officers were wounded when militants lobbed a grenade within a cordoned area amid an exchange of fire.