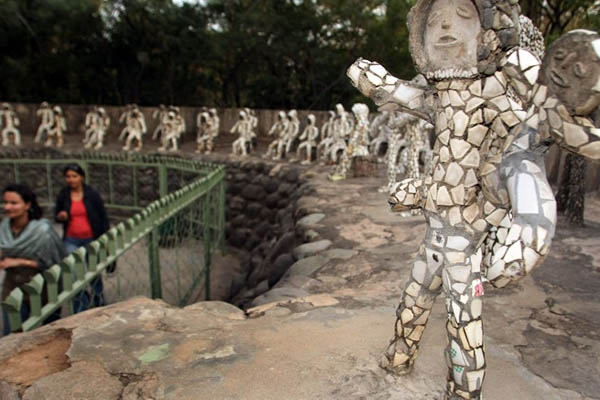 Nek Chand spent 18 years landscaping and transforming a forest into a majestic garden.

Deep inside his massive garden of handmade waterfalls and sculptures, Nek Chand recalls toiling away secretly in the dead of night for a staggering 18 years to create his wonderland in north India. Riding his bicycle after dark to a state-owned forest, Chand spent night after night clearing patches of ground and transforming the landscape into a majestic garden that would eventually cover 20 acres.

“I started building this garden as a hobby” in the 1950s, Chand told AFP in a rare interview on the eve of his 90th birthday on Monday. “For 18 years nobody came to know. There was a forest here, who would come here and what for? There were no roads to come and go,” Chand said nostalgically, seated in the garden that has become a major tourist attraction, drawing thousands of visitors a day.

After the deadly violence and upheaval of partition in 1947, India set about building a capital for Punjab state, carved out of a region that stretched across the border into newly formed Pakistan. From the tons of building materials and rubbish that followed, Chand carefully collected what he considered gems while working as a lowly roads inspector in the upcoming Chandigarh city.

Pottery pieces, glass, tiles and even broken bathroom sinks were used to make sculptures of men and women, fairies and demons, elephants, monkeys and gods. “I had many ideas, I was thinking all the time. I began carrying all the material on my bicycle and collecting it here,” Chand said of his garden of mosaic pathways, hidden chambers and courtyards. “I did three to four rounds on my cycle each day. I saw beauty and art in what people said was junk.”

When his secret was finally discovered in 1976, authorities threatened demolition, claiming Chand had violated strict land laws. But an amazed public rallied behind him, leading to his appointment as head of the newly opened Rock Garden of Chandigarh.

Chand stepped up his creation of hundreds of sculptures—mostly made from broken household material and discarded personal items including electric sockets, switches, bangles and bicycle frames. Some made of broken glass bangles show girls dancing, others of ceramic pieces depict men at a party pouring glasses of whiskey.

Ticket sales grew as word of the secret garden spread, with some 3,000 people from across the country and overseas now wandering through daily.

“It’s so amazing. It’s something like reliving Willy Wonka and the Chocolate Factory,” said Jasmine Paul, a resident of Vancouver who was holidaying in India. “It is just like the fairy tales that you grow up reading.”

With no formal education in art or sculpture, Chand drew inspiration from his childhood when he played near a river flowing through his village in what is now Muslim-majority Pakistan. Chand and his family were forced to flee across the border during partition because they were Hindus, finally settling in Chandigarh, the shared capital of Punjab and Haryana states.

“That is why there is a childlike quality to the sculptures,” said Alan Cesarno, a British volunteer with the Nek Chand Foundation that was set up in 1997 to raise funds for the garden’s upkeep. “When you look around you realize that it is actually a child’s version of a fantasy kingdom,” he said, standing next to one of the several waterfalls.

Chand’s statues have found their way into museums across the world, including at the National Children’s Museum in Washington, the American Folk Art Museum in New York and the RIBA gallery in Liverpool in 2007.

Back home, the garden is facing conservation challenges, including a lack of funds from the state government, which takes the ticket sales, according to volunteers. Vandalism has been reported more than once and enthusiastic visitors often climb or lean on the structures, damaging their fragile pieces.

“In a country known more for slums and garbage dumps, the rock garden stands as an exceptional example,” said Mani Dhillon, a volunteer involved in the garden’s upkeep. “It is perhaps the only place of its kind in the entire world. The administration and the people must realize its importance, they must come forward and save it before it’s too late,” she told AFP.

While Chand still oversees the garden as its founding head with near daily visits, his age and failing eyesight mean he can no longer spend the long hours needed to create new sculptures. He is however undaunted by the challenges facing his more than half a century’s work, saying he has faith in God from which he draws his strength.

“I am not scared of anything. Had I been scared, how would I have worked in the dead of the night in the jungle?”