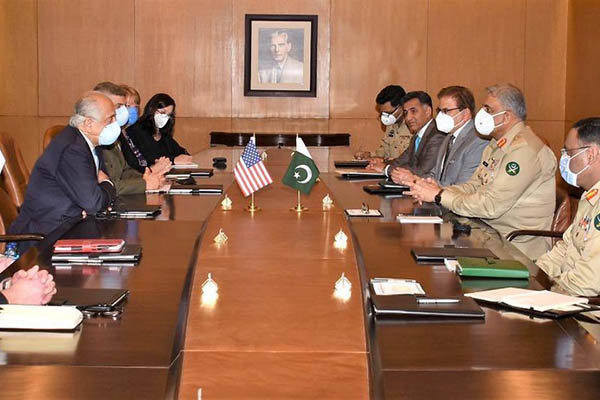 Prime Minister Imran Khan has a clear vision for regional peace and connectivity and all national institutions are united in making that vision a reality, Pakistan Army chief Gen. Qamar Javed Bajwa said on Monday.

During a meeting with U.S. Special Representative for Afghan Reconciliation Zalmay Khalilzad, the Chief of Army Staff also stressed that Pakistan wanted to ensure “long-awaited” peace, progress and prosperity in the region.

According to a statement issued by the military’s media wing, the Inter-Services Public Relations (ISPR) Directorate General, the delegations discussed matters of mutual interest, regional security and the ongoing Afghanistan peace process. “The visiting dignitary [Khalilzad] greatly appreciated Pakistan’s role in the ongoing peace process and said that it could not have succeeded without Pakistan’s sincere and unconditional support,” it added.

Khalilzad’s visit to Pakistan follows the launch of long-delayed intra-Afghan dialogue that seeks to end the Taliban insurgency in the war-torn state. The talks kicked off with a high-profile ceremony that was attended by delegations of both Kabul and the Taliban, as well as U.S. Secretary of State Mike Pompeo, Afghan High Council for National Reconciliation Chairman Abdullah Abdullah, Qatari Foreign Minister Sheikh Mohammed bin Abdulrahman Al Thani, and senior diplomats from several countries.

Pakistan has long maintained that it has played a “significant” role in bringing the Taliban to the negotiation table, claiming it also held end the stalemate over the prisoners’ release that had been blocking dialogue.

In its statement on Khalilzad’s trip, the U.S. embassy said he “stressed the need for ongoing regional and international support for this historic opportunity for peace.”