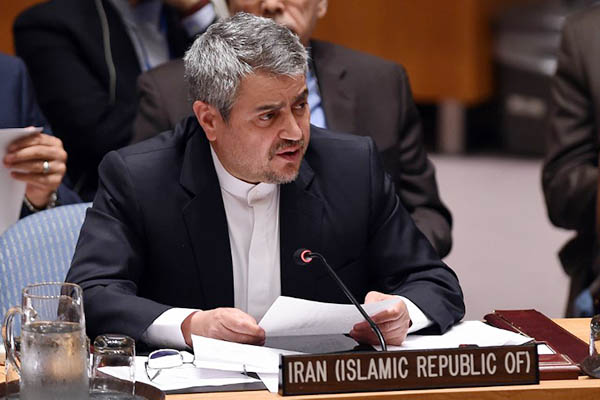 In letter, Tehran’s ambassador has claimed Washington is interfering in his country’s internal affairs

Iran on Wednesday angrily accused the United States at the United Nations of meddling in its domestic affairs after President Donald Trump backed anti-government protests.

Iran’s U.N. Ambassador Gholamali Khoshroo said in a letter that the U.S. government “has stepped up its acts of intervention in a grotesque way in Iran’s internal affairs under the pretext of providing support for sporadic protests, which in several instances were hijacked by infiltrators.”

Khoshroo charged that the United States had violated international law and the principles of the U.N. charter, and urged countries to condemn Washington’s statements. “The president and vice president of the United States, in their numerous absurd tweets, incited Iranians to engage in disruptive acts,” said Khoshroo in the letter to the Security Council and to U.N. Secretary-General Antonio Guterres.

“The U.S. Department of State went so far as admitting that the U.S. government wants to encourage protestors in Iran to change their government, admitting that the U.S. is engaged in interfering with the internal affairs of Iran through Facebook and Twitter,” he added. The letter was released after Trump pledged to help Iranians “take back” their government and the White House weighed sanctions against those involved in the crackdown against demonstrators.

“Such respect for the people of Iran as they try to take back their corrupt government. You will see great support from the United States at the appropriate time!” Trump tweeted.

U.S. Ambassador Nikki Haley said Tuesday she would be seeking an emergency U.N. Security Council meeting to discuss the violence that has left 21 dead. But diplomats said on Wednesday that no such meeting was scheduled for the time being.

Russia and China are among the countries that are expected to oppose Security Council action on Iran, diplomats said.

U.N. Secretary-General Antonio Guterres earlier deplored the loss of life during the anti-government protests and said “further violence must be avoided.”

U.N. rights chief Zeid Ra’ad Al Hussein separately urged Iranian authorities “to handle the wave of protests that have taken place around the country with great care so as not to further inflame violence and unrest.”

Protests over economic problems broke out in Iran’s second city Mashhad on Dec. 28 and quickly spread across the country, turning against the regime as a whole. Tens of thousands of Iranians took to the streets in several cities on Wednesday for pro-regime rallies.