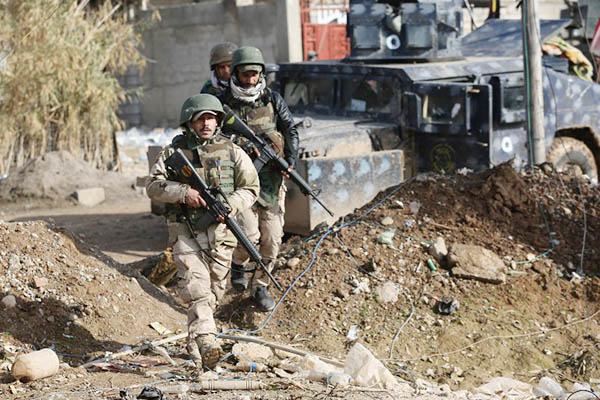 Iraqi forces advanced on Thursday after declaring a new phase in their offensive on eastern Mosul, stepping up efforts to reclaim the Islamic State group’s last major stronghold in the country.

Elite forces have retaken several parts of eastern Mosul since beginning the massive operation to recapture the northern city from the jihadists on Oct. 17, but I.S. still occupies the city’s west.

Security chiefs said several neighborhoods had been taken, with the bodies of I.S. fighters seen lying on the streets and drone footage showing others retreating.

Retaking Mosul could effectively end the jihadist group’s days as a land-holding force in Iraq and deal a death blow to the “caliphate” I.S. leader Abu Bakr al-Baghdadi proclaimed in the city in June 2014.

“The second phase of liberating the left bank in Mosul was launched, and our forces began advancing toward Al-Quds neighborhood,” said Staff Lieutenant General Abdulghani al-Assadi, a senior officer in Iraq’s Counter-Terrorism Service. “Our forces clashed with the enemy and there is resistance,” he told AFP, adding forces on the northern and southern fronts were also advancing.

Mosul, now the last Iraqi city in which I.S. still holds significant territory, is split by the Tigris River, with the east side referred to as the left bank and the west as the right.

Iraq’s federal police commander, Raed Shaker Jawdat, said “the enemy’s line of defense has fallen back” inside the city. “The streets of the Al-Salam, Al-Intisar, Al-Wahda, Al-Falestin and Al-Quds neighborhoods are strewn with the bodies of Daesh fighters,” he said.

Police had also entered deep into the district of Jadida al-Mufti.

The commanding chief of the offensive, Staff Lieutenant General Abdulamir Yarallah, late Thursday announced “the liberation of the Al-Quds 1 district.”

The commander said police drones had spotted I.S. fighters retreating to the city’s western side via a pedestrian bridge badly damaged in the fighting.

Centcom, the U.S. military command in the Middle East, said the U.S.-led coalition fighting I.S. had disabled “the last bridge crossing the Tigris river inside Mosul” this week at the Iraqi government’s request. It said meanwhile that an investigation had been opened after a U.S.-led air raid on an I.S. van during the Mosul operations on Thursday struck “what was later determined to be a hospital compound parking lot resulting in possible civilian casualties.”

A Mosul inhabitant who requested anonymity reported hearing many explosions and said residents were holed up indoors.

The new push in the battle for Mosul comes after progress slowed to a crawl in the past few weeks. After two months of fighting, Iraqi Prime Minister Haider al-Abadi last week said the army had decided to review battle plans and pause to reduce losses.

The fighting has been all the more devastating as it has been happening in a city amid civilians. I.S. has targeted the army with car bombs on at least 900 occasions in the streets of Mosul since Oct. 17, according to Abadi.

I.S. overran large areas north and west of Baghdad in 2014, but Iraqi forces backed by U.S.-led airstrikes have since regained much of the territory they lost to the jihadists.

Abadi had pledged that Mosul would be recaptured by year’s end—a goal that is now out of reach, as operations in western Mosul have yet to begin. The Iraqi prime minister also said this week that three months were needed to eliminate I.S. in the country.

High-ranking officials believe the battle against I.S. could drag on, and the Sunni Muslim extremist group continues to carry out attacks in areas from which it had been dislodged by the government offensive.

Last week, an I.S. triple car bombing on a market in Gogjali a few kilometers east of Mosul killed at least 23 people. The army had retaken Gogjali from the jihadists in early November after more than two years of I.S. occupation.