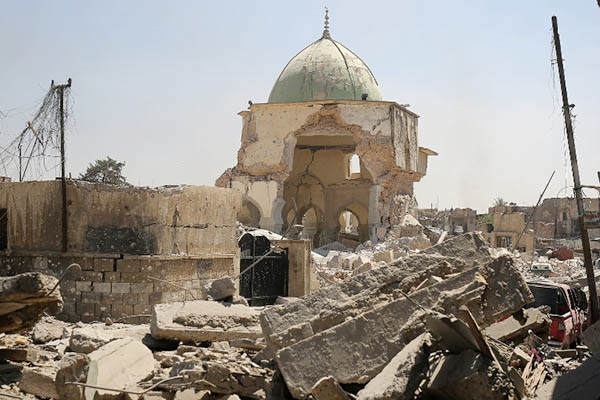 Iraq declared the Islamic State group’s “caliphate” was coming to an end after it recaptured Mosul’s iconic Nuri mosque on Thursday, three years to the day after the jihadists proclaimed it.

The jihadist group announced its self-styled “caliphate” on June 29, 2014, encompassing swathes of territory its fighters overran in Iraq and neighboring Syria. Its rule since then has been marked by repeated atrocities including mass beheadings and other executions documented in photos and videos that its supporters share online.

“Counter-Terrorism Service forces control the Nuri mosque and Al-Hadba [minaret],” said Iraq’s Joint Operations Command. Prime Minister Haider al-Abadi hailed the recapture of the mosque as a sign of I.S.’s impending defeat. “We are seeing the end of the fake Daesh state,” Abadi said in an English statement on his Twitter account.

The U.S.-led anti-I.S. coalition also said the end was near. “I can’t put a timeline on that for them, but I see it closer to days than a week or weeks,” coalition spokesman Colonel Ryan Dillon said, referring to an announcement of Mosul’s recapture. “The Old City remains a difficult, dense, suffocating fight,” Dillon said of the area of Mosul where the Nuri mosque is located. But he praised the Iraqi forces’ “grit and determination” and said coalition support would help bring “an imminent liberation.”

The Great Mosque of Al-Nuri and its famed Al-Hadba leaning minaret were Mosul landmarks and also held major significance in the history of I.S. in Iraq. I.S. declared its “caliphate” in an audio recording three years ago. A video released a few days later showed I.S. chief Abu Bakr al-Baghdadi speaking at Friday prayers at the Nuri mosque and calling on Muslims to obey him, his only known public appearance as “caliph.”

Baghdadi’s fate and whereabouts remain unknown, and I.S. has lost much of the territory it overran in 2014. The jihadists blew up the mosque and minaret on June 21 as they put up increasingly desperate resistance to the advance of Iraqi forces. Only the base of the minaret remains, and while the mosque’s dome is still standing, much of the rest of it has been destroyed.

The loss of the iconic 12th century minaret—one of the country’s most recognizable monuments sometimes referred to as Iraq’s Tower of Pisa—left the country in shock. But the destruction had been widely anticipated, with commanders saying I.S. would not have allowed Iraqi forces to score a hugely symbolic victory by recapturing the site.

I.S. claimed on its Amaq propaganda agency that the site was hit in a U.S. airstrike, but the U.S.-led coalition said it was the jihadists who had “destroyed one of Mosul and Iraq’s great treasures.”

Russia has said it is seeking to verify whether the I.S. leader, whose whereabouts have been unknown for months, was killed when its warplanes hit the group’s leaders in a night air raid in Syria last month.

The mosque in Mosul’s Old City was the latest in a long list of priceless heritage and historical monuments destroyed by I.S. during its three-year rule over swathes of Iraq and Syria. The jihadists cast the destruction of such sites as a religious duty to wipe out idols, but they have shown no qualms about trading in smaller pieces to fund their rule.

The minaret, which was completed in 1172 and had been listing for centuries, is featured on Iraq’s 10,000-dinar banknote and was the main symbol of Iraq’s second city—giving its name to countless restaurants, companies and even sports clubs in Mosul.

After seizing Iraq’s Sunni Arab heartland in June 2014, I.S. reportedly rigged Al-Hadba with explosives but was prevented from blowing it up by the local population. The jihadists consider the reverence of objects, including of such sites, as heresy.

The mosque’s destruction came three days after government forces launched an assault on the Old City, the last district of Mosul where I.S. still controls territory.

The part of Mosul still held by the jihadists is small, but its narrow streets and the presence of a large number of civilians has made the operation perilous. While Iraqi forces are moving closer to victory in Mosul, the city’s recapture would not mark the end of the war against I.S., which still holds significant territory elsewhere in Iraq and Syria.

Some parts of Iraq could see an increase in violence as the jihadists lose more ground, as they will likely increasingly turn to carrying out bombings and other attacks in government-held areas.