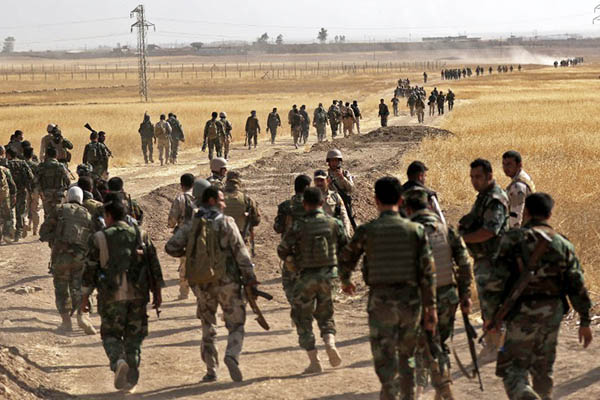 Omran Lass is willing to die to liberate his Iraqi Kurdish town from the Islamic State group, but he and hundreds of fellow peshmerga fighters are having trouble finding anyone to fight.

“Around four kilometers from here, at the end of the road, there’s my house and even my car,” Lass says as he gazes toward the columns of acrid black smoke rising from Bashiqa. He is one of thousands of Kurdish peshmerga fighters joining Iraqi federal forces in a major U.S.-coalition-backed offensive on Mosul, the country’s second largest city and the last significant urban area held by I.S.

Lass was forced to flee Bashiqa, 25 kilometers northeast of Mosul, when the jihadists unleashed a lightning assault capturing swathes of Iraqi and Syrian territory before declaring a “caliphate” straddling the two countries in 2014.

Now he says he and his comrades can’t wait to push I.S. back. “We would die for this region. We have resisted all occupations, by [now-executed president] Saddam Hussein, by others, and now this one by I.S.,” says the 33-year-old. “The Kurds will retake every centimeter of their land.”

Iraqi and international forces have slowly regained major cities from I.S. using U.S.-led airstrikes and elite counter-terrorism commandos to battle the jihadists street by street, most recently in Fallujah, west of Baghdad.

Extremist holdouts offer fierce resistance in the form of snipers, booby-trapped buildings and vehicle-borne bombs. But, as Lass acknowledges with a chuckle, the peshmerga fighting to secure Bashiqa in recent days have encountered an altogether different problem: an almost total lack of resistance from I.S.

“We can’t find anyone to fight us,” he says. “I.S. never fight man to man, they fire their mortars from further and further away and that’s it.”

Along the road snaking through the scorched plain, explosions from mortar rounds fired by I.S. fighters in Bashiqa toward the peshmerga puncture the quiet. The Kurds relocate to a hill overlooking the road and carefully load four rockets into a truck-mounted launcher. Equations scrawled on a notepad provide the trajectory, and fighters film on their mobile phones as the projectiles scream into the distance.

Lass, his face creased by the sun and fringed by a thick, black beard, says he had to flee his home with his four children in the middle of the night when I.S. came. He took refuge in Arbil, the Kurdish regional capital, before joining the peshmerga like many displaced Kurds. Fellow volunteer Chafiq Bradosti says he quit his job as a notary to help recover “every inch of Kurdish soil from the terrorists.”

“It’s an important day for me, I am proud to be with the peshmerga liberating this land from I.S.,” says Bradosti, binoculars slung round his neck. The line of pick-ups and cars carrying peshmerga lengthens beneath the hill, with some fighters wearing the traditional Kurdish billowy trousers and headscarves and others decked in military fatigues.

Some heads are topped by turbans, others with berets. While the outfits may vary, nearly every fighter has a mobile phone in his hand ready to take selfies and film any combat that breaks out. Each also brandishes an automatic rifle, either the ubiquitous Kalashnikov or a more modern, U.S.-made M-16.

Iraqi lawmaker Salim al-Shabake circulates among the troops in full military uniform. A beaming smile behind his moustache, the M.P. notes “the very high morale of the peshmerga” and insists their advance on Mosul will be “extremely quick.”

In spite of Shabake’s upbeat prognosis, progress is meticulously slow, as the peshmerga must remove mines and roadside bombs planted by I.S. before any advance. Senior Iraqi officials have warned that the operation for Mosul could take months.

Near Bashiqa, the peshmerga wait for coalition air raids to strike I.S. targets before advancing on three fronts towards the town. Provincial council member Hussein Zaiar Ali says that fighters and officials will also need to ensure fleeing civilians are cared for. “We have taken steps to accommodate the displaced and 13 camps are ready,” he says, adding that the council plans to “provide services to inhabitants after the liberation” of Bashiqa.

But Lass and his colleagues insist they won’t stop there. “We will defend Kurdistan, and all of Iraq,” he says, as a pillar of smoke from an air strike drifts slowly above the town.