Is Pakistan Ready for Ebola? 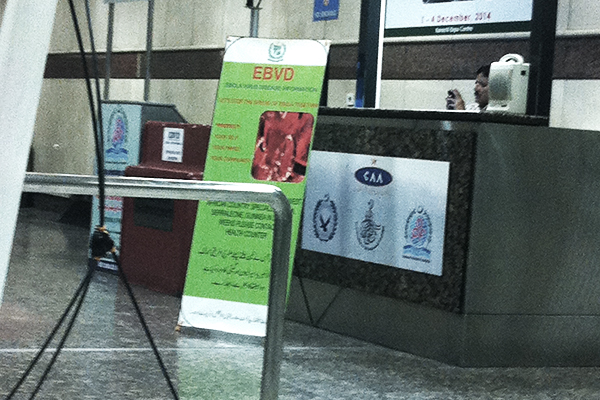 Here’s what you need to know about the virus, and how to stop it.

It was a close call. On Nov. 22, the medical superintendant at Faisalabad’s Allied Hospital said that the death earlier that morning of a 40-year-old male patient may have been caused by the Ebola virus. The patient, a resident of Chiniot who had returned from Togo, Africa, earlier this month, actually died from Hepatitis C, according to government officials.

Ebola, first discovered in the Congo and Sudan in 1976, has claimed over 5,000 lives globally since its reappearance in West Africa last March. So far, not a single Ebola case has been reported in Pakistan. But this could change quickly, with the virus easily overwhelming Pakistan’s notoriously fragile and underfunded healthcare system and posing catastrophic consequences for its population of 180 million people.

“The risk of an imported case is low, but the risk exists and we need to be ready,” Dr. Michel Thieren, the World Health Organization representative in Pakistan, tells Newsweek. “Let’s not forget that Pakistan is also a strong supporter of the peacekeeping missions in the continent.”

Pakistan has some 8,000 military personnel deployed on U.N. peacekeeping duties in Africa, 2,500 of them in the Western region of the continent. For its part, the military says it has restricted the movement of its personnel deployed abroad, especially in Liberia (one of the most severely infected countries alongside Guinea and Sierra Leone), and ensured that personnel returning home are screened for diseases.

Then there are the estimated 4,000 Pakistanis who live and work in West Africa, most in the construction and IT sectors. Mohammad Ashraf Saleem, Pakistan’s high commissioner in Nigeria, puts the number of Pakistani travelers returning home from West African countries at 300 per month—most transit through Dubai, Doha or Abu Dhabi. At the same time, international NGOs, like Save the Children, and even organizations like WHO are tapping Pakistani manpower to replace easily targeted Westerners in African countries.

Pakistani health officials have been working for the last three months to detect and prevent the spread of Ebola in the country.

In August, Pakistan organized Ebola-screening workshops with the crews of Emirates Airline, Qatar Airways and Turkish Airlines. State carrier Pakistan International Airlines, which does no direct flights to West African countries, was not included in the drills.

Pakistan also requires all incoming international airlines to forewarn it, at least 24 hours in advance, about passengers who may recently have visited Ebola-stricken countries. Ebola detection booths with thermal scanners—to detect high body temperature, an Ebola symptom—have been installed at the international airports of Karachi, Lahore and Islamabad. But this system relies almost entirely on travelers volunteering their travel history on landing cards, and on the screening apparatus actually working: health officials tell Newsweek that the scanners at Lahore and Rawalpindi do not function.

The measures Pakistan has taken against Ebola to date are unconvincing, even to officials.

“I personally feel that the scanners do not fulfill the purpose,” says Saira Afzal Tarar, minister of state for health, “Even WHO agrees that the U.S. president installed them [at U.S. airports] due to public pressure.” She says travelers suspected of Ebola infection “will instantly be isolated and sent for medical checkups. If there are no symptoms, we have to let them go. But we do hope to monitor them for the next 21 days.” Citing lack of resources and expertise, she concedes that tackling Ebola in the event of an outbreak will likely prove difficult.

Dr. Amina Saqib, health director at the Lahore Airport, is equally circumspect. “More than 6,000 people use this airport daily,” she says. “It is just not possible to check the temperature of each and every single incoming traveler.”

Since Ebola is not contagious during its incubation period—which can run from anywhere between two to 21 days, with patients not exhibiting any symptoms (fever, severe headaches, diarrhea, vomiting)—culling travelers who may be infected is additionally challenging. Saqib says Pakistan is “making progress on preventative measures” and that her department is regularly engaged with airport staff on the matter. These measures are nothing close to what India has done: conducting mock drills at airports, tightening surveillance systems, and launching a 24/7 hotline for assistance on Ebola.

“What if someone does happen to enter Pakistan with the illness?” asks Thieren. “What then? We need to be prepared.” Going by the accounts of local health officials, Pakistan’s readiness for Ebola prevention, detection and containment is dangerously inadequate.

From the World Health Organization, here’s some more information about Ebola:

Ebola spreads through direct human-to-human contact (through broken skin or mucous membranes) with the blood, secretions, organs or other bodily fluids of infected people, and with surfaces and materials (e.g. bedding, clothing) contaminated with these fluids. Ebola can only enter your body through your mouth, nose and eyes, or a break in the skin.

It can be difficult to distinguish Ebola from other infectious diseases such as malaria, typhoid fever, and meningitis. Confirmation that the symptoms are caused by Ebola can only be made through lab tests, which would show low white-blood cell and platelet counts and elevated liver enzymes for those infected.

The incubation period—the time interval from infection to onset of symptoms—is two to 21 days. Humans are not infectious until they develop symptoms. First symptoms include the sudden onset of fever, fatigue, muscle pain, headache, sore throat, and loss of appetite. This is followed by vomiting, diarrhea, rash, symptoms of impaired kidney and liver function, and in some cases, both internal and external bleeding (e.g. from the gums, in stools).

Early supportive care with rehydration, symptomatic treatment improves survival. There is as yet no licensed treatment proven to neutralize the virus, but a range of blood, immunological and drug therapies are under development. The average case-fatality rate is around 50 percent. (Case-fatality rates have varied from 25 percent to 90 percent in past outbreaks.)

Some Key Do’s and Don’ts and Facts: 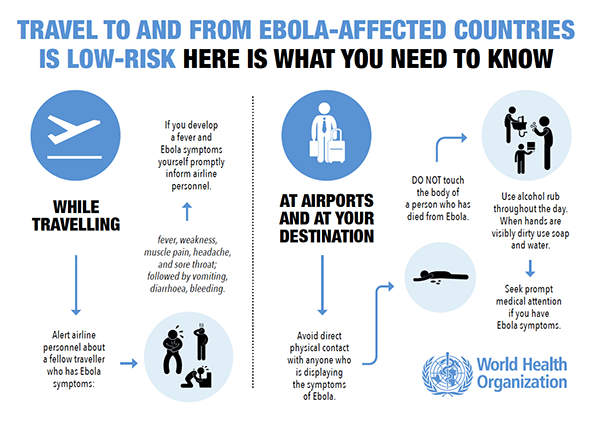