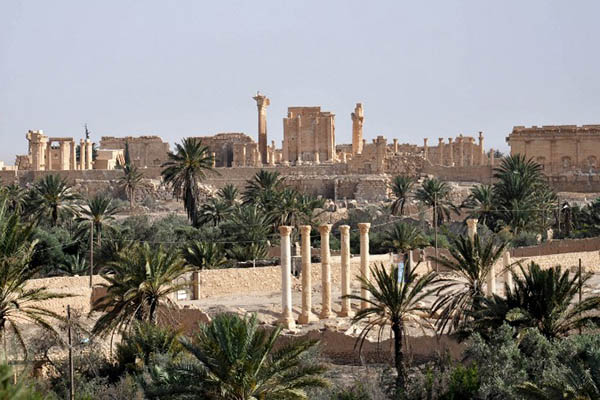 Khaled al-Assaad had served as the chief archaeologist at the UNESCO World Heritage site.

A UNESCO World Heritage site famed for well-preserved Greco-Roman ruins, Palmyra was seized from government forces in May, fuelling fears the I.S. jihadists might destroy its priceless heritage as it had done in other parts of Syria and Iraq. Syrian antiquities chief Maamoun Abdulkarim told AFP he had urged Khaled al-Assaad to leave Palmyra, but he had refused.

“He told us: ‘I am from Palmyra and I will stay here even if they kill me.’”

The killing is one of hundreds that have been carried out by I.S. in and around Palmyra since they took the city. The United States, France and UNESCO voiced outrage over Assaad’s death.

“He was the head of antiquities in Palmyra for 50 years and had been retired for 13 years,” Abdulkarim said. He hailed Assaad as a leading expert on the ancient history of the city, which grew from a caravan oasis first mentioned in the second millennium B.C.

“He spoke and read Palmyrene, and we would turn to him when we received stolen statues from the police and he would determine if they were real or fake.”

Abdulkarim said Assaad’s body had been hung in the city’s ancient ruins after being beheaded. But the photo circulating online showed a body on a median strip of a main road, tied to what appeared to be a lamppost. A sign attached to the body identified it as that of Assaad. It accused him of being an apostate and a regime loyalist for representing Syria in conferences abroad with “infidels,” as well as being director of Palmyra’s “idols.” It also claimed he had been in contact with regime officials.

Abdulkarim said Assaad had been detained by I.S. last month along with his son Walid, the current antiquities director for Palmyra, who was later released. He said the jihadists were looking for “stores of gold” in the city. “I deny wholeheartedly that these stores exist,” Abdulkarim said. “The whole family is truly remarkable. [Assaad’s] other son Mohammed and his son-in-law Khalil actively participated in the rescue of 400 antiquities as the town was being taken over by the jihadists,” he said.

The Syrian Observatory for Human Rights, a Britain-based monitor, also reported the death, saying Assaad had been killed in a “public square in Palmyra in front of dozens of people.”

UNESCO’s director general, Irina Bokova, said she was “both saddened and outraged to learn of the brutal murder,” adding that “they killed him because he would not betray his deep commitment to Palmyra.”

“His work will live on far beyond the reach of these extremists. They murdered a great man, but they will never silence history.” The killing also prompted condemnation from French Foreign Minister Laurent Fabius, who said Assaad had worked with numerous French archaeological missions over the years.

“This barbaric murder joins a long list of crimes committed over the past four years in Syria,” he said in a statement, calling for those responsible to be brought to justice. In Washington, State Department spokesman John Kirby decried the “brutal, gruesome murder.”

I.S. captured Palmyra on May 21, prompting international concern about the fate of the city’s antiquities. The I.S. group’s harsh vision of Islam considers statues and grave markers to be idolatrous, and the group has destroyed antiquities and heritage sites in other territory under its control in Syria and Iraq.

So far, Palmyra’s most famous sites have been left intact, though there are reports I.S. has mined them, and the group reportedly destroyed a famous statue of a lion outside the city’s museum in June.

Most of the pieces in the museum were evacuated by antiquities staff before I.S. arrived, though the group has blown up several historic Muslim graves. I.S. has also executed hundreds of people in the city and surrounding area, many of them government employees. The group also infamously used child members to shoot dead 25 Syrian government soldiers in Palmyra’s ancient amphitheater.