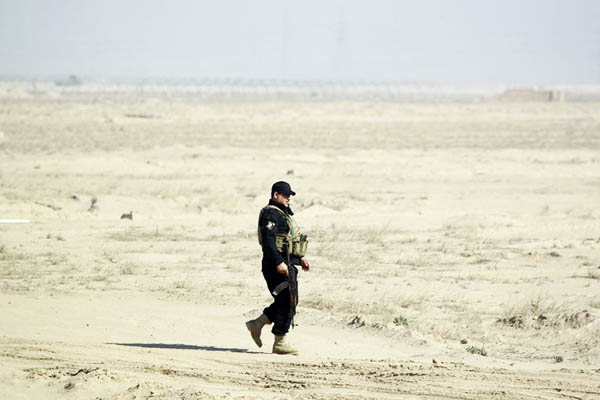 An Iraqi soldier on patrol near Anbar province. Haidar Hamdani—AFP

Small town near airbase housing U.S. troops has been cleared of the extremist group.

Iraqi government forces and allied tribal militia have retaken the town of Al-Baghdadi, from where jihadists had threatened to attack an airbase housing U.S. troops, the U.S. military said Friday.

Fighters from the Islamic State group had taken Al-Baghdadi, a small town on the Euphrates River in western Iraq, in February, posing a threat to a nearby base where American forces train their Iraqi counterparts. A statement from the headquarters of the U.S.-led coalition conducting airstrikes in Iraq and Syria against jihadist targets said it had ordered 26 airstrikes around the town since Feb. 22.

“Iraqi security forces and tribal fighters from the Anbar region have successfully cleared Al-Baghdadi of ISIL (I.S.), retaking both the police station and three Euphrates River bridges,” it said. U.S. ground forces were not directly employed in the battle, but “the coalition supported the operation with surveillance assets and advise and assist teams” attached to Iraqi headquarters units.

Iraqi and Kurdish forces, supported by Sunni tribes and Shia militias, have begun to push back I.S. forces from a swathe of territory the jihadists seized last year in their quest to build an Islamist “caliphate.”

The Islamic State group is widely reviled for it brutal tactics, including mass rapes, murders and kidnaps—but concerns have also been raised over sectarian killings by Shia pro-government forces in recaptured Sunni areas.

On Feb. 13, as Al-Baghdadi was falling to I.S. fighters, suicide bombers attacked Iraqi forces protecting the nearby Al-Asad air base, where a small contingent of U.S. troops works with Iraqi allies. No Americans were hurt in the assault but their relative proximity to the fighting increased fears that U.S. ground troops could find themselves drawn into the conflict.