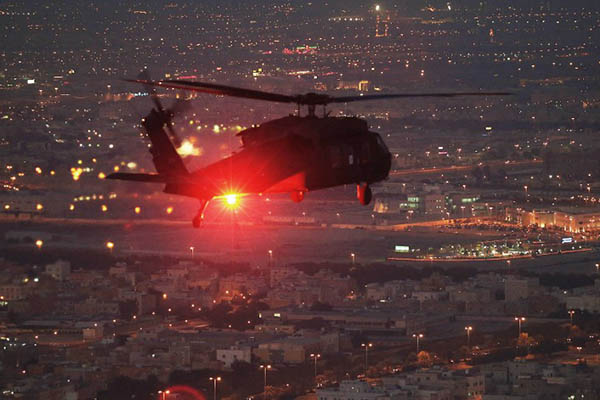 The United States upped the ante in its war on the Islamic State in Syria, killing a dozen militants and a major fundraiser on Saturday in a rare ground operation by Special Forces, the White House said.

U.S. commandos have entered Syria before, including last year on a failed bid to rescue Western hostages, but this week’s operation appeared to mark a departure in missions targeting the militants. The decision to send commandos to strike the inner circle of the I.S. group was an unexpected move by the Americans, who have so far fought the extremists almost entirely from the air. The raid is the first publicly confirmed American ground operation targeting jihadists in Syria.

On orders from President Barack Obama, elite troops from the U.S. Army’s Delta special operations forces based in Iraq sought to capture the I.S. militant Abu Sayyaf, who oversaw oil smuggling for the jihadists. “During the course of the operation, Abu Sayyaf was killed when he engaged U.S. forces,” a spokeswoman for the White House National Security Council, Bernadette Meehan, said.

In the course of the raid, a Yazidi woman was rescued after apparently being enslaved by the commander and his wife, Umm Sayyaf, who is also suspected of being a member of the I.S. group and was captured, Meehan said. “The operation also led to the freeing of a young Yazidi woman who appears to have been held as a slave by the couple. We intend to reunite her with her family as soon as feasible,” she added.

The Yazidis, a religious minority in northwest Iraq, have been persecuted by jihadists, and rights groups say Yazidi women have been kidnapped, raped and sold as slaves. The I.S. militant’s wife is under “U.S. military detention in Iraq” but American officials had not yet decided on her ultimate legal fate.

U.S. officials, the White House said, suspect she “played an important role in ISIL’s terrorist activities, and may have been complicit in the enslavement of the young woman rescued last night.”

The American special forces went after Sayyaf in Al-Omar in eastern Syria, in a region where one of the country’s biggest oil fields is located. Members of the Delta special operations unit descended on Sayyaf’s compound in Black Hawk helicopters and Osprey tilt-rotor aircraft, a defense official told AFP.

I.S. militants at the multi-story compound tried to use women and children as shields but U.S. forces were able to “separate the innocents,” said the official, speaking on condition of anonymity.

In a firefight, U.S. troops killed “about a dozen” armed militants but were able to avoid causing civilian casualties, the official said. At one point, he said, fighting took place “at very close quarters, and there was hand-to-hand combat.”

Describing Sayyaf as a “finance guy” who had become increasingly involved in the group’s operational side, the official said the death was likely to hurt the militants’ funding abilities.

Pentagon chief Ashton Carter hailed the raid as a triumph. “The operation represents another significant blow to ISIL, and it is a reminder that the United States will never waver in denying safe haven to terrorists who threaten our citizens, and those of our friends and allies,” he said, using an alternative acronym for the Islamic State group.

U.S. forces suffered no casualties in the night raid, officials said, without offering details about how many troops were involved. At least one of the Black Hawk choppers used in the raid had bullet holes from I.S. gunfire.

It was not the first time U.S. officials acknowledged a covert raid inside Syria. U.S. commandos last year tried to rescue an American journalist held hostage by the Islamic State, James Foley. But the operation failed, and Foley and other hostages had been moved by the time the U.S. forces arrived. Foley was later executed.

Sayyaf, the senior militant targeted in the latest raid, was involved with I.S. military operations and had “a senior role in overseeing ISIL’s illicit oil and gas operations,” the White House said. The oil smuggling provides “a key source of revenue that enables the terrorist organization to carry out their brutal tactics and oppress thousands of innocent civilians.”

U.S.-led airstrikes, launched in August last year, have repeatedly targeted the I.S. group’s oil facilities. The operation was carried out with the full approval of the Iraqi government, officials added. The United States has publicly severed ties with President Bashar al-Assad’s Syrian regime.

Obama was grateful to “the Iraqi authorities for their support of the operation and for the use of their facilities, which contributed to its success,” Meehan said.