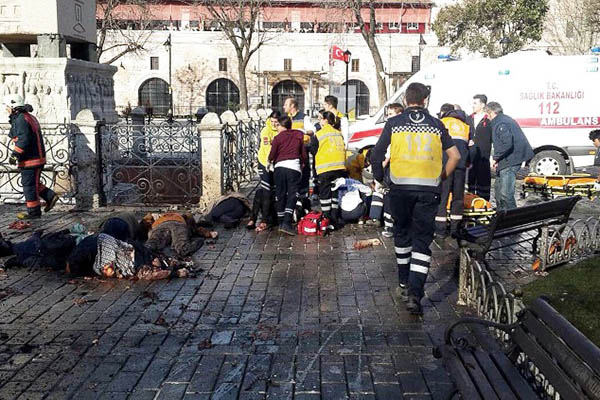 At least eight German tourists among the dead, according to Angela Merkel.

A Syrian suicide bomber struck the heart of Istanbul’s busiest tourist district, killing 10 people, most of them Germans, in the latest deadly attack blamed on Islamic State jihadists.

Images from the scene on Tuesday showed several bloody corpses lying on the ground close to the iconic Ottoman-era Blue Mosque in Sultanahmet, a district home to Istanbul’s biggest concentration of historic monuments.

Turkey has been hit by a string of deadly attacks this year, but Tuesday’s bombing was the first time in recent memory tourists had been targeted in the heart of the city. German Chancellor Angela Merkel said at least eight Germans were amongst the dead and warned its nationals to keep away from public places and tourist attractions, although a Turkish official said nine had been killed.

U.N. chief Ban Ki-moon condemned the attack on Istanbul, a city of 14 million and Turkey’s commercial hub, as “despicable.”

“The terrorists are the enemies of all free people, they are enemies of humanity, be it in Syria, Turkey or France or Germany,” Merkel said, stressing that Berlin would fight terror “with determination.”

Peru confirmed one of its nationals had died in the attack, while Oslo said a Norwegian was one of 15 people wounded in the blast. Turkish media reports said German and Peruvian tourists were also among those hurt.

Turkish President Recep Tayyip Erdogan said the attack was carried out “by a suicide bomber of Syrian origin,” while Prime Minister Ahmet Davutoglu said the man belonged to the Islamic State extremist group. Officials said he was a Syrian born in 1988.

Turkey has been on high alert after a series of attacks blamed on the Islamic State jihadist group, including a double suicide bombing in October in Ankara that killed more than 100 people.

The explosion occurred in the mid-morning by the Obelisk of Theodosius, a monument from ancient Egypt that was re-erected by the Roman Emperor Theodosius and stands just outside the famous Blue Mosque. Police threw up a tight security cordon around the area as helicopters hovered overhead, and crowds of worried locals and tourists clamored to find out what had happened, an AFP correspondent said.

“The explosion was so loud, the ground shook. There was a very heavy smell that burned my nose,” a German tourist named Caroline told AFP. “I heard a very loud blast, then came the screams,” added a Turkish man who did not want to be identified, adding: “Then I saw a ball of fire, and started to run away.”

The authorities imposed a broadcast ban on reporting of the attack, prompting television channels to halt live coverage from the scene.

Berlin travel agency Lebenslust Touristik said several of the Germans killed in the blast were on one of its tours when the attack happened, warning the number of injured could rise. “It is feared that more members of the group have been hurt,” it said in a statement, adding that 33 people were in Istanbul with the operator at the time of the attack.

Turkish security forces rounded up 16 suspected Islamic State members in Ankara and 21 in the southern city of Sanliurfa, reports said, although it was not clear if they were directly linked to the Istanbul attack.

Previous attacks in 2015, including October’s deadly suicide bombings in Ankara, had all targeted pro-Kurdish groups who are staunchly opposed to Islamic State. But it was the first time any recent attacks specifically targeted tourists in Turkey, whose tourism industry is a key component of the economy.

“The style of the attack, a suicide bomber, and the [target], a group of tourists, suggests a jihadist attack,” said a Western diplomat. “If this is the case, it’s a sign that Daesh has decided to attack the Turkish state.”

So far there has been no claim of responsibility for Tuesday’s attack.

Long accused by its Western allies of not doing enough in the fight against the Islamic State, Turkey is now hosting aircraft from the U.S.-led coalition engaged in deadly attacks on the extremist group’s strongholds.

Turkey is also waging an all-out assault on the outlawed Kurdistan Workers’ Party (PKK), which has staged dozens of deadly attacks against members of the security forces in the southeast. A Kurdish splinter group, the Freedom Falcons of Kurdistan (TAK), claimed a mortar attack on Istanbul’s second international airport on Dec. 23 that killed a female cleaner and damaged several planes.