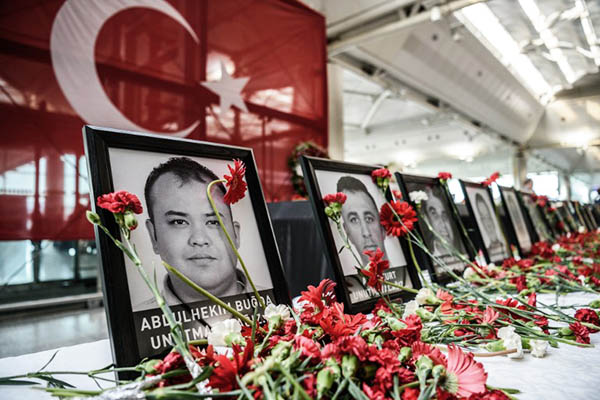 Turkish media says 24 people have been detained over the attack, and has identified the organizer as Chechen Akhmed Chatayev.

The suicide attackers who launched the deadly Istanbul airport assault were planning to take dozens of passengers hostage, Turkish media reported on Friday, as two of the bombers were identified.

Turkish officials have pointed blame at the Islamic State jihadist group for Tuesday’s gun and bomb spree at Ataturk airport, which left 44 people dead including 19 foreigners. “They say they are doing this in the name of Islam,” President Recep Tayyip Erdogan said on a visit to Istanbul. “That has nothing to do with Islam. Their place is in hell,” he added.

State-run news agency Anadolu said 24 people had been detained in Istanbul in a string of raids over the attack, including 15 foreigners. Citing a prosecution source, the agency named two of the attackers as Rakim Bulgarov and Vadim Osmanov, without giving their nationalities.

Officials had previously said the three bombers were a Russian, an Uzbek and a Kyrgyz national.

Police had also found a damaged laptop in a dustbin near an Istanbul apartment used by the attackers and were trying to retrieve information from it, Anadolu added.

Turkish media identified the strike’s organizer as Akhmed Chatayev, the Chechen leader of an Islamic State cell in Istanbul who reportedly found accommodation for the bombers. Chatayev allegedly organized two deadly bombings this year in the heart of the city’s Sultanahmet tourist district and the busy Istiklal shopping street, the Hurriyet newspaper said.

Michael McCaul, chairman of the U.S. House Committee on Homeland Security, described Chatayev as “probably the number one enemy in the Northern Caucasus region of Russia.”

“He’s traveled to Syria on many occasions and became one of the top lieutenants for the minister of war for ISIS operations,” McCaul told CNN.

Swedish court documents seen by AFP showed the 36-year-old had been sentenced to 16 months in jail there in 2008 for arms trafficking, after which he would be deported. He was granted political asylum in Austria in 2003.

The pro-government Sabah newspaper reported that the attackers scouted the scene and planned to take dozens of passengers hostage inside before carrying out a massacre. But they began the assault early after attracting suspicion, Sabah said.

CCTV images released by police show the three alleged attackers arriving, wearing dark coats over their suicide vests—clothing that was much too heavy for a hot summer night. More images show a plainclothes police officer confronting one of the men and asking to see his identification. The attacker pulls out a gun and shoots him.

Turkey has been rocked by a series of attacks in the past year blamed on either I.S. jihadists or Kurdish rebels. These have taken a heavy hit on tourism, and on Friday Germany warned its citizens to exercise particular caution if they travel to Turkey.

The latest assault sparked global condemnation, with consuls from a dozen countries around Europe and beyond gathering at the airport Friday to lay a wreath. Hundreds of mourners also gathered in Istanbul on Thursday for the funeral of popular 28-year-old teacher Huseyin Tunc, who was at the airport welcoming a friend.

“We still can’t believe it,” said one of his pupils, Batuhan Karabey. “He was more than a teacher to us—he was like a big brother, helping us a lot.”

Hurriyet reported the bombers had rented a flat in Istanbul’s Fatih district and paid 24,000 Turkish lira in advance for a year’s rent.

The police raided the apartment after the attack, according to an upstairs neighbor, who said the men kept the curtains closed. She never saw the attackers, but she heard them, and complained to neighborhood officials about a strange smell. “A very weird, chemical smell,” she told Hurriyet. “Police came after the bombing… I lived on top of the bomb.”

Hurriyet also quoted a local plumber, identified only by his initials E.S., who said one of the attackers came to his shop to ask if he could fix their tap. “He spoke in broken Turkish. He took me home,” the plumber said. “I changed the tap. I saw three people inside. They looked like bandits—one of them always stood by me.”